Posted by cedricsbigmix at 9:04 PM No comments:

Corey Glass is not AWOL, is not a deserter

In a dramatic development for US war resister Corey Glass, currently residing in Canada, there are no charges against him. May 21st was when Corey Glass was told he would be deported. Corey Glass is an Iraq War veteran and a US war resister. He went to Canada seeking asylum -- the kind of welcoming Canada provided to war resisters ("draft dodgers" and "deserters") during Vietnam. After being told he was being deported, he's been 'extended' through July 10th. June 3rd Canada's House of Commons voted (non-binding motion) in favor of Canada being a safe harbor for war resisters. Today is when Russell Goldman (ABC News) reports the development. In "Canada Ready to Deport U.S. Deserters," Goldman reveals:

Unbeknownst to him and his legion of supporters, Glass, 25, was actually discharged from the U.S. Army shortly after he went AWOL in 2006.
Glass and about 40 other American deserters who like him sought refugee status have prompted a national debate in Canada that last month reached the floor of Parliament on where to draw the line between cowardice and conscience.
"I had absolutely no idea that I had been discharged," said Glass when ABC News informed him of his status. "This is insane. This is so weird. There are no warrants? No one is looking for me?"
According to U.S. Army documents and officials Glass was discharged from the California National Guard on Dec. 1, 2006, four months after he arrived in Canada and six months after he failed to show up to a required muster.

Army Major Nathan Banks is quoted stating the US military does not consider Glass AWOL or a deserter, there are no charges against him, he is out of the military.

Three in five Canadians favour giving U.S. soldiers resisting the Iraq War a chance to stay in Canada as permanent residents, a new poll said yesterday.
Results from the nation-wide Angus Reid survey showed 64% of Canadians support war objectors seeking refuge north of the border.
"I think Canadians were opposed to the Iraq War from the start," said Lee Zaslofsky, national co-ordinator for the War Resister Support Campaign (WRSC).
"The fact that it has dragged on so long -- is in shambles, really -- I think Canadians understand why someone would want to stop fighting for that kind of cause in that kind of place."

The news today includes a shocker for many reporters. Ebony Horton, whom we called out in May, and others quick to swallow, should damn well pay attention. Sarah Childress (Newsweek) reports, "The number of active-duty soldiers who deserted the Army last year is higher than previously reported -- at 3,301, the military said last week. (The Army said the original figure was tallied incorrectly.) Deserters are branded after abandoning their posts without permission for 30 days. The tally is hardly at Vietnam War levels, but it's still significant for an all-volunteer military."

As Rebecca noted Friday, we are discussing how to cover the illegal war at Third and this news about Glass actually jumps a planned angle for Sunday. What's happened isn't surprising historically. Corey Glass should inquire about his IRR status before attempting to visit or return to the US. For Glass and for others, action is still needed. So planned actions should continue such as Canada's War Resister Support Campaign calling for a "NATIONAL DAY OF ACTION, Wednesday July 2nd" -- that's today:

U.S. Iraq War resister Corey Glass is still facing deportation on July 10th, despite the Parliament of Canada having voted in favour of a motion to let Corey and other U.S. war resisters stay.

The federal government and the Minister of Citizenship and Immigration must respect the will of Parliament and implement the motion which calls on the government to "immediately implement a program to allow conscientious objectors and their immediate family members […] to apply for permanent resident status and remain in Canada; and … the government should immediately cease any removal or deportation actions … against such individuals."

On July 2nd, the War Resisters Support Campaign is calling on all supporters to call Minister Diane Finley and ask her to:
• STOP deportation proceedings against Corey Glass and all U.S. Iraq war resisters; and
• IMPLEMENT the motion adopted by Canada’s Parliament to allow U.S. Iraq war resisters to apply for permanent resident status.

Here are the numbers to call:
Minister of Citizenship and Immigration Diane Finley
613.996.4974

It is more urgent than ever that we send a message to the Canadian government that Canada needs to welcome US men and women who refuse to participate in the illegal and immoral war in Iraq. There are three actions you can take today to help support the war resisters.

Add your name to the petition calling for the federal government to implement a provision to allow war resisters to stay in Canada. Initial signatories include June Callwood, David Suzuki, Maude Barlow, Shirley Douglas, Naomi Klein, Ann-Marie MacDonald, and many others.

Please download a copy of the petition, sign it, circulate it and return it to the campaign.

Write a letter to the editor
Letters to the editor are an important piece of the public debate on this issue. The majority of Canadians opposed the war in Iraq and support the provision of sanctuary for US soldiers. Send a copy of your letter to the campaign to resisters@sympatico.ca.


And, in the US, Courage to Resist is planning "July 9th actions at Canadian Consulates nationwide:"

Join a vigil and delegation to a Canadian consulate near you on Wednesday, July 9th to support war resisters! On the eve of Corey Glass' possible deportation, we will demand, "Dear Canada: Abide by the June 3rd resolution - Let U.S. war resisters stay!" More details and cities to be confirmed soon!

We're Having a Party! 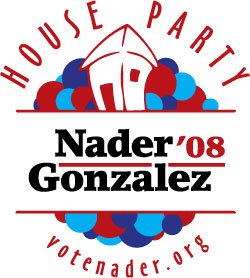 We're having a party!

And we're inviting you to be one of 100 Nader/Gonzalez supporters to host a House Party on Saturday night July 26, 2008. Sign up now.

With the help of modern technology, you can have Ralph Nader right there with you in your living room.

If you choose to be one of the 100 to host a house party, we will send you a remarkable documentary DVD about Ralph Nader - An Unreasonable Man and the Awake from Your Slumber DVD starring Ralph Nader and Patti Smith - both autographed by Ralph Nader.

Plus, we'll throw in a special collector's edition Nader/Gonzalez button.

The purpose of the National Nader/Gonzalez House Party Day?

To reach our goal, we are asking that each house party host bring together 20 or more friends, family, and other party goers to donate $50 each.

Now, of course, you won't be doing this alone.

Ralph is really excited about our house party project. (Check out our House Party video here.)

He'll be available that night - either by phone or through the wonders of the Internet - to talk with you and answer your questions.

So, if you want to host a house party - click here. Our house party staff will answer any and all questions you may have.

If you can't host a house party, please donate now to help fund our ballot access drive - remember, you can give Nader/Gonzalez up to the legal limit of $4,600. And if you choose, your name will appear on our home page!

While McCain and Obama continue to flip-flop toward November, Ralph Nader remains steadfast - standing firm on a platform to shift the power away from the corporations and back to the people.

On Sunday, Ralph told ABC's George Stephanapolous that we intend to get on at least 45 states.

And we can't let Ralph down.

Stand by the candidacy that will stand by you.

This will help us secure ten state ballot lines by July 6. Together, we are making a difference.

PS: We invite your comments to the blog.

Sherry and Lyle highlighted the above.

The e-mail address for this site is common_ills@yahoo.com.

Posted by cedricsbigmix at 6:30 AM No comments:

Barack closes his make up case


Posted by cedricsbigmix at 9:32 PM No comments:


Posted by cedricsbigmix at 8:58 PM No comments: