Questions the administration and others should be asked by Congress

The comic below is Isaiah's latest The World Today Just Nuts and it's Michael Hayden speaking before the Senate.

I really like the comic but in terms of the Senate, I think from now on, when anyone's been sworn in to testify before them that has any connection to the administration, someone should ask the following:

If they'd had Alberto Gonzales under oath when he testified before the Senate the last time, that would have been the perfect opportunity. But everybody. Donald Rumsfeld comes in to talk about the military, anyone comes in, ask them about Plamegate.

Condi Rice comes in to talk about the State Department, ask her about Plame.

Let's see if they pull a Michael Hayden and say they can only answer in closed testimony or if they'll give a denial?

That's my thought for today. 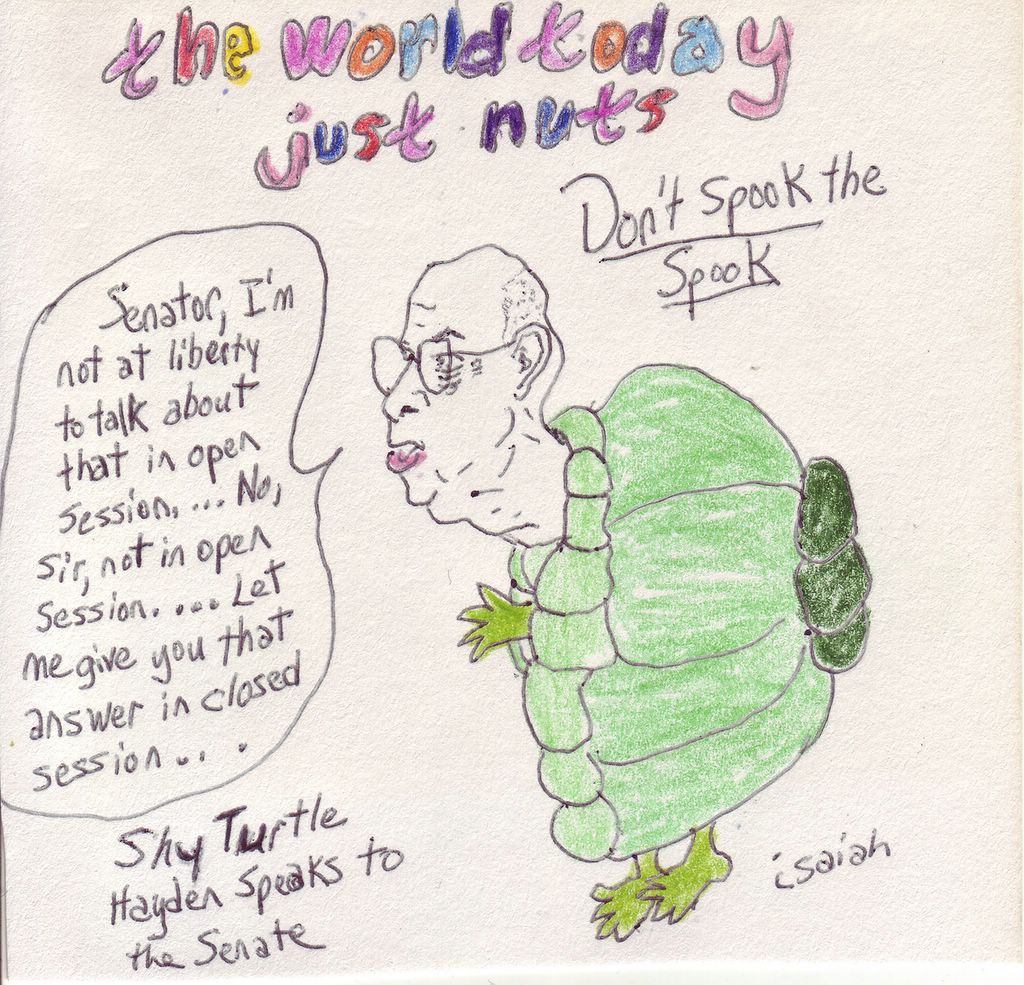 I was studying the comic at work today and we were all talking about how Hayden avoided so many questions.

It got us thinking what sort of questions we'd ask him? We agreed that the NSA was an important one and then we started thinking of other things like Hurricane Katrina and the spying on Americans.

When someone said spy, I thought, Valerie Plame.

The point isn't thinking someone will confess at some point to being involved (there are probably a lot of people involved).

The point is to get them on record. Plamegate is going to break at some point and it would be nice to see, for instance, Stephen Hadley on the news telling a senator that he has no knowledge would be an interesting clip for the nightly news programs to have handy if Hadley ended up indicted.

If Rove gets indicted, they better show that clip where Scott McClellan was saying that Rove had nothing to do with it.

A Note to Our Readers
Editorial: Here it comes, here it comes again
TV Review: Will & Grace -- goodbye, good riddance
Senate plays "Don't Spook the Spook" with Michael Hayden
"Can an unindicted co-conspirator remain at the White House? Personally, I don't think so."
Into the e-mails
Laura Flanders spoke with Penny Lang about the importance of music and much more
Radio highlights for Sunday
"We were all wrong!" Not so fast

This is a short entry just to see how they go. Rebecca and I have been talking about doing some of these. I'll see how it goes. Maybe I'll be able to blog more often than just Tuesdays and Thursdays? We'll see.
Posted by cedricsbigmix at 6:26 PM