RUMOR HAS IT THAT FADED CELEBRITY BARRY O MAY GO TO N.Y.C. AND LECTURE AT COLUMBIA.

At today's US State Dept press briefing, spokesperson Jeff Rathke continued the pretense that the department wants a free press:


First, I mentioned yesterday our Free the Press campaign for this week. We have two cases today. Our first comes from Ethiopia. The freelance journalist and former high school English teacher Reeyot Alemu remains in prison after being convicted under Ethiopia’s anti-terrorism proclamation on January 19th, 2012. Reeyot is among 18 other journalists detained in Ethiopia on charges related to their work, making Ethiopia the largest detainer of journalists on the continent.
Reeyot was arrested in June 2011 after writing articles that criticized government policies. She was tried, convicted, and sentenced to 14 years on terrorism-related charges. Her sentence was reduced to five years by the supreme court in August 2012, and she lost a subsequent appeal to dismiss the case altogether. We call on the government to release Reeyot, who is in prison simply for exercising her right of freedom of expression. We urge the government to refrain from using its anti-terrorism proclamation as a mechanism to curb the free exchange of ideas.

Our second case comes from Vietnam, where a blogger, Ta Phong Tan, winner of the 2013 International Women of Courage Awards, currently is imprisoned amid a 10-year sentence for writing posts critical of the government and the Communist Party. She was among the first bloggers to write and comment on political news events long considered off limits by authorities. And we call on the Government of Vietnam to release her immediately and to allow all Vietnamese to express their political views freely both online and offline.


As we noted in yesterday's snapshot, Iraqi journalist Thaer Ali was killed in Mosul, executed by the Islamic State.  Agenzia Nova notes IS grabbed him three weeks ago and charged him with the 'crime' of having a cellphone and using it to communicate with person or persons outside of Mosul.   Shafaq adds that Thaer "was the editor of al-Rae local newspaper, which had been issued in Mosul before the events of last June."

"The events of last June" refer to when the Islamic State took control of Mosul.  NRT points out, "IS militants regularly kill Mosul residents who oppose the group's rule, including political candidates, lawyers, professors and even members of its own leadership."


The State Dept can't say a word about the murder of Thaer Ali.

This while pretending they're defending freedom of the press worldwide with their silly little campaign.


When Reuters' journalist Ned Parker had to leave Iraq this month for the 'crime' of reporting, Reporters Without Borders observed:

According to the Journalistic Freedoms Observatory, a Reporters Without Borders partner organization, the authorities in the southern province of Basra are prosecuting freelance journalist Nasser Al-Hajjaj for criticizing the governor on social networks. The head of the Supreme Islamic Council has asked the governor to withdraw his complaint. Al-Hajjaj is currently in Lebanon.
Reporters Without Borders and JFO wrote a joint letter to the Supreme Council of the Judiciary, the Baghdad Court of Appeal and the Court for Press and Publication Cases in February 2014 drawing attention to the way many government officials and politicians abuse the possibility of bringing legal proceedings in order to sabotage the work of journalists.


Iraq is ranked 156th out of 180 countries in the 2015 Reporters Without Borders press freedom index.

And Iraq's prime minister continues to do his part to keep the attacks on the press alive. Alsumaria notes that today the Council of Ministers condemned the press and did so with (yet another) statement from Haider al-Abadi attacking the press.

He carried his attack to the Parliament today.  All Iraq News notes that he decried the 'defaming' of the Iraqi military.

See, if the Iraqi military attacks civilians and steals and burns down civilian homes after 'liberation,' Haider's okay with that.  He'll give them a day or two to break the law and commit crimes and then declare publicly 48 or hours later that starting now -- right now -- these crimes need to stop.

Now if the press dare report on these crimes -- as Ned Parker did -- that's bad.

Since its recapture two days ago, the Sunni city of Tikrit has been the scene of violence and looting. In addition to the killing of the extremist combatant, Reuters correspondents also saw a convoy of Shi'ite paramilitary fighters – the government's partners in liberating the city – drag a corpse through the streets behind their car.
Local officials said the mayhem continues. Two security officers, speaking on condition of anonymity, said on Friday that dozens of homes had been torched in the city. They added that they had witnessed the looting of stores by Shi'ite militiamen.

Later Friday, Ahmed al-Kraim, head of the Salahuddin Provincial Council, told Reuters that mobs had burned down "hundreds of houses" and looted shops over the past two days. Government security forces, he said, were afraid to confront the mobs. Kraim said he left the city late Friday afternoon because the situation was spinning out of control.


Reporting those realities is a 'crime' in Haider's eyes and he not only issued a statement attacking reporters today, he also attacked them before the Parliament.


Appearing this month on NPR's Morning Edition (link is audio and transcript), Ned discussed the report with Steve Inskeep:


Steve Inskeep: What happened that instead began to make this a story about you?

Ned Parker: Well our team, on the day that Tikrit was liberated, they called me during the day and said, "We've witnessed an execution by federal police of a detainee in the street."  And it was a mob mentality.  And they could only stay a few moments because it was such a crazed scene I think our people feared for their own safety.  So when they came home that evening, we had a huge debate about do we report this, is this too sensationalist?  It's one incident.  But when we looked at the whole picture, we also saw a body being dragged by a group of Shi'ite paramilitaries.  We had   photos of this which we published  And there had been looting and arson of areas that surround Tikrit.  So we felt that we had to report what happened there, that if we didn't, we wouldn't be meeting our obligation to report fairly and impartially about the critical issue right now: What happens when security forces enter an area that has been under Islamic State control, that is Sunni and then has predominately Shia security paramilitary forces enter.

Steve Inskeep: This is the most basic job of a war correspondent: Go look at a war and report exactly what you see.

Ned Parker: Mm-hmm.  Right.  And this was a test case for the government.  The Iraqi government and the US government have spoken about the importance of post-conflict stabilization operations in Iraq.

Steve Inskeep: What happened after you published the story?

Ned Parker: It was picked up everywhere.  I think it was seen because of what our correspondents witnessed -- this execution which was horrific -- where they watched two federal policemen basically trying to saw off the head of a suspected Islamic State fighter to cheers from federal police, our story became really the example of what went wrong in Tikrit.  And it was published on April 3rd.  The night of April 5th on Facebook, on a site associated with Shi'ite paramilitary groups and political forces, a picture of myself went up calling for Iraqis to expell me. It quickly received over 100 shares and comments including, "Better to kill him than to expel him."

Steve Inskeep:  Did it blow over?


Ned Parker: No.  It only got worse.  I-I did go out and try to have meetings with some people, different prominent Iraqis, about it.  And then on Wednesday night [April 8th]  the channel of Asaib al-Haq -- which is a prominent Shi'ite political party and paramilitary group, my face is the backdrop as the anchor talks and he actually waives also a print out of my face and talks about how I should be expelled from the country and then proceeds to read a letter from an Iraqi living in the United States who also again calls for me to be expelled and describes Reuters as trampling on the dignity of Iraq and Shi'ite paramilitary groups and after that there's no way I could have stayed in the country -- both for myself and for my staff.  My presence was polarizing the situation.  So I left the next day.

All Iraq News notes Parliament held a session today in which they hosted Hiader.  Alsumaria reports Haider al-Abadi declared that there was no marginalization of any groups of people in Iraq and that the Cabinet votes are determined by consensus.


Well then it's time for Shi'ite militias to start killing Shi'ites because they're being 'marginalized' what with all the time these thugs are devoting to killing Sunnis. 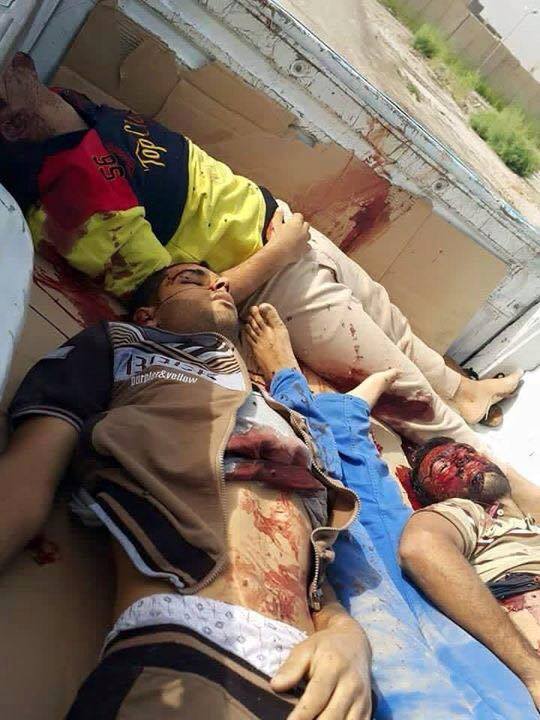 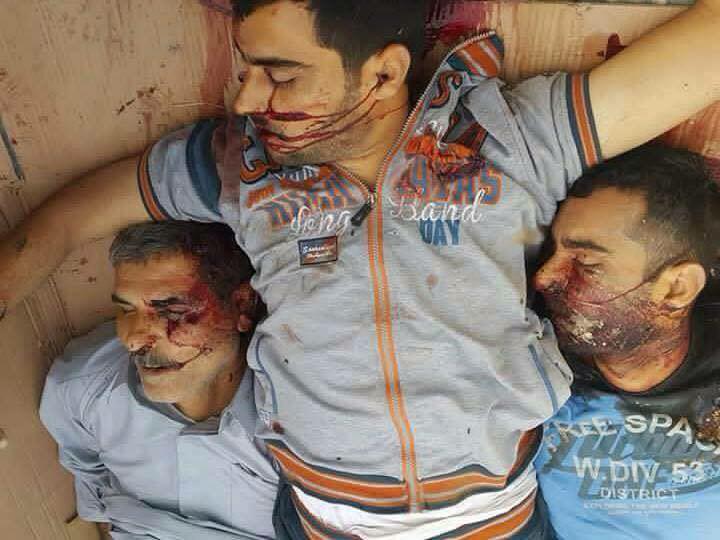 
Graffiti is going up around Baghdad, threatening the displaced from Anbar, telling them to leave or be killed.  And to the south of Baghdad, in Mahmudiya, the Shi'ite militias have declared all Anbar refugees must leave within 72 hours or they will be killed.


But remember, Haider said this morning that no group is targeted in Iraq.

Of course, Rudaw reports that he also told the Parliament that if the day came when he "couldn't protect the Iraqi people, I will leave my post."

Does he think he's protecting the Anbar refugees?

Does he think he's protecting the Sunni population?

If so, he has a very minimal notion of what "protection" actually means.


RECOMMENDED:  "Iraq snapshot"
"VA Responds to IAVA’s ‘The Wait We Carry’ Data Too..."
"Isakson to Hold Hearing on VA’s Inclusion in ‘High..."
"Haider (again) attacks the press, Shi'ite militias..."
"community (intro to recycled cinema)"
"Variety crawls up Hulu's butt"
"Uh-oh, Baracky-eoh!"
"They're always stupid at Corrente"
"Barack keeps lying"
"It keeps you laughing"
"Blur"
"Say what?"
"Stalker's ratings"
"Twitter on the ropes"
"Cranky Will Not Be Stopped"
"THIS JUST IN! CRANKY CAN'T BE STOPPED!"