WHAT HAPPENS TO AGING HAGTRESSES WHEN THEY REALIZE CHILDHOOD FAME IS BEHIND THEM?  THEY BECOME MORE AND MORE DESPERATE FOR ATTENTION.

TAKE ALYSSA MILANO WHO HAS NO CAREER.  SHE USED HYPERBOLE IN HER LATEST FURIOUS ATTEMPT TO PRETEND SHE SOMEHOW MATTERS.

WHEN WE SPOKE WITH HER ABOUT THE FALLOUT FROM HER TWEET, SHE ASKED THESE REPORTERS, "WHAT'S HYPERBOLE?"

YET AGAIN WE WERE REMINDED THAT THE ONLY THING SHE EVER READ WAS A SCRIPT.  AN UNDERNOURISHED MIND IS A SAD AND SCARY THING.

Yesterday, former Vice President Joe Biden was supposed to deliver a 'major address' on foreign policy.  He did no such thing.  He offered a critique of President Donald Trump.  Some of it factual, some of it borderline and some of it just cheap rhetoric.  The speech served to remind once again how hollow Joe Biden is.  Marianne Williamson, like Joe, is seeking the Democratic Party's presidential nomination.  Had she delivered an address on foreign policy, it would have been major.  Marianne knows that it takes more than finger pointing to change things.  Change requires actions and new paths.  Joe wants to be president so he can takes us back to the past -- when segregationist were 'cuddly' and 'warm' (to him anyway) and women who were sniffed and groped never complained publicly.

Joe has no brave, new ideas.  He has nothing to offer.  And a vague promise just reminds people they've heard it from him before. 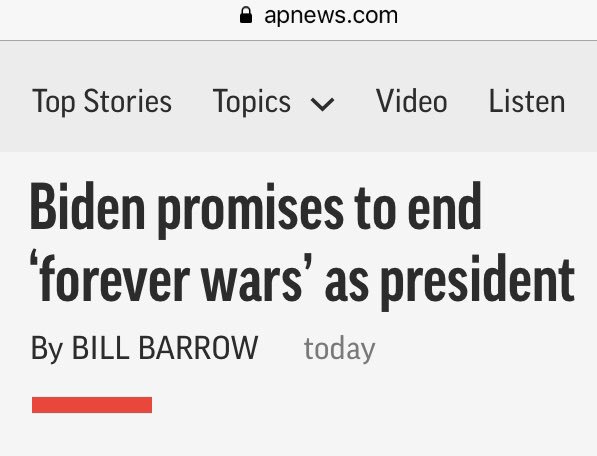 Obama and Biden campaigned on this, won twice, and didn’t do it once they were in office. He’s lying for cheap political gain.
0 replies1 retweet23 likes

“what do you mean get out of Afghanistan??? i don’t wanna be there forever, just for 100 years!”
0 replies0 retweets8 likes

He also told the educator crowd at the NEA forum that he was for free college. Could not find that position on his webpage.
0 replies0 retweets1 like


25 people are seeking the Democratic Party's presidential nomination.  One is Governor Jay Inslee.  Ahead of Joe's speech, Jay Tweeted:


Joe Biden’s vote to authorize the Iraq War in 2002 was a failure of judgment. I voted against it because it was a unilateral, ill-timed, go-it-alone war.

VP Biden must address this enormous mistake in his foreign policy speech today.
/>

Jay was in the US House of Representatives in 2002 and he voted against the Iraq War.  Joe Biden was in the US Senate and Joe voted for it.  And Joe continued to support it.  And Joe is partly responsible for the rise of ISIS.  ISIS took root in Iraq because Nouri al-Maliki was persecuting Sunnis.  He persecuted many groups, but he persecuted Sunnis consistently.  He persecuted Sunni politicians, Sunni activists, Sunni women and girls.  It was already known that he was a thug in 2008 -- in fact, Hillary Clinton, then a US senator, rightly called him that in an April Senate hearing.  That's why Hillary would not be placed over Iraq by Barack Obama.  That's why she did not interact with Nouri.  (Hillary's primary interaction with Iraq as Secretary of State was with Hoshyar Zebari who was then the Foreign Affairs Minister.)  Despite the fact that Nouri was known to be a thug, known to be running secret prisons, etc., Joe and Barack backed Nouri.

How far did they back him?  In March 2010, Iraq held elections.  Nouri was supposed to glide to an easy win.  He did not  He did not win.  Ayad Allawi's Iraqiya won.  That's who the people voted for.  And it would have been a different road for Iraq -- a focus on Iraq coming together and a future for all Iraqis regardless of belief, gender, you name it.

But Joe and Barack backed Nouri.  Even after he lost.  They brokered an agreement that tossed aside the votes of the people and gave Nouri a second term (The Erbil Agreement).  They swore it was binding and would be honored. The contract gave various groups various concessions in order to get them to sign off on Nouri getting a second term.  He used it to get that second term and then refused to honor it.  And Joe and Barack?  They didn't do a damn thing.

And Joe gave Allawi and others some insipid speech where he tried to draw a comparison between Ireland and Iraq that no one got -- not even the Americans in the room.

This second term is when Nouri goes especially demented and attacks everyone.  He'll, for example, deploy military tanks to circle the homes of Members of Parliament that he disagrees with.  He'll accuse the Sunni vice president of being a terrorist and start a witch hunt.  He'll send the military to invade the homes of Sunni politicians.  Sunni people?  The men he can't arrest?  He has the police arrest their mother, their sister, anyone in the house.  The women then disappear in the prison system and are beaten and raped.


RECOMMENDED: "Biden needs to grow the hell up"
"Media Alert: Green Party of the U.S. Annual Nation..."
"Our New Video Series Highlights 30 Years of Transf..."
"U.S. House of Representatives Creates Requirement …"
"Some Tweets from Margaret Kimberley"
"Some Tweets from Sharyl Attkisson"
"Join the CIA: Travel the World Passing Out Nuclear..."
"Iraq snapshot"
"Congresswoman Rashida Tlaib’s Statement on Trip to..."
"Baldwin, Cornyn Legislation to Support Veterans Ex..."
"Senator Hirono Highlights Hawaii’s Continued Effor…"
"Reps. Davis, Smucker, and Davids Introduce Legisla…"
"Following Reports That Trump Administration Is Con..."
"Bass, Lieu & Democratic Members of Judiciary Crime..."
"As U.S. Women’s National Team Returns Home With Th..."
"Iraq snapshot"
"South Central Michigan Greens to Meet 1-3pm Saturd…"
"Select Discounted Tickets Now Available"
"Episode 138: EPA Workers Attacked!; Why Do People …"
"Help the Autoworker Newsletter prepare workers for..."
"The Obama Wars"
"SINCE WASHINGTON D.C. WON'T OVERSEE ITS GUEST WORK..."
"Iraq snapshot"
"Video of the Week: Michael Pollan on the Importanc…"
"Official Secrets: Best Movie So Far This Year"
"Support the only Democrat who can beat Trump"
"Iraq snapshot"
"Iraq snapshot"
"Violence in Iraq"
"Some Tweets from Tulsi Gabbard"
"Some Tweets from Bernie Sanders"
"Some Tweets from Kirsten Gillibrand"
"Some Tweets from Beto O'Rourke"
"Some Tweets from Marianne Williamson"
"Tulsi"
"Awful Clara Jeffery and hideous Joe Biden"
"I agree with Sean Ono Lennon"
"The race for the Democratic nomination"
"Again on Epstein"
"Julian Epstein engaged in blackmail?"
"Epstein -- a wide ranger of problems"
"Who is Ghislaine Maxwell?""Again on Epstein"
"Another nutty report from Michael Isikoff goes up …"
"Dario"
"Epstein was intell?"
"Stupid idiot"
"Some Tweets from Ajamu Baraka"
"Taco Tater Tot Casserole"
"Valerie's Home Cooking"
"They don't work for Nancy"
"We pay for it, why do they get to own it?"
"A strike takes place on Martha's Vineyard"
"The future"
"Some Tweets from Mike Gravel"
"Uh, Mia, shut up"
"More on Fifth taker Will Little"
"Will Little invokes the Fifth"
"uh, isn't the death penalty itself a hate crime?"
"deran and adrian"
"rain"
"some more on 'here's lucy'"
"roger on 'american dad'"
"CIA, Epstein, Joe Biden, FACEBOOK, etc"
"Eve Reload"
"Science post - black holes and butterflies and runaway moons"
"Tom Steyer?"
"He got by with a lot of help from his friends"
"Interesting thread"
"Who trusts Mueller?"
"Ajamu Baraka, Ray McGovern and Zach Haller"
"Who is telling the truth?""The next big question"
"There is a difference"
"Peace?"
"A good article at COUNTERPUNCH"
"Guess what show just got cancelled"
"NETFLIX raises hopes but never follows through"
"NETFLIX doesn't know what it's doing"
"Summer TV"


"Someone needs to get an education"

Posted by cedricsbigmix at 9:35 PM