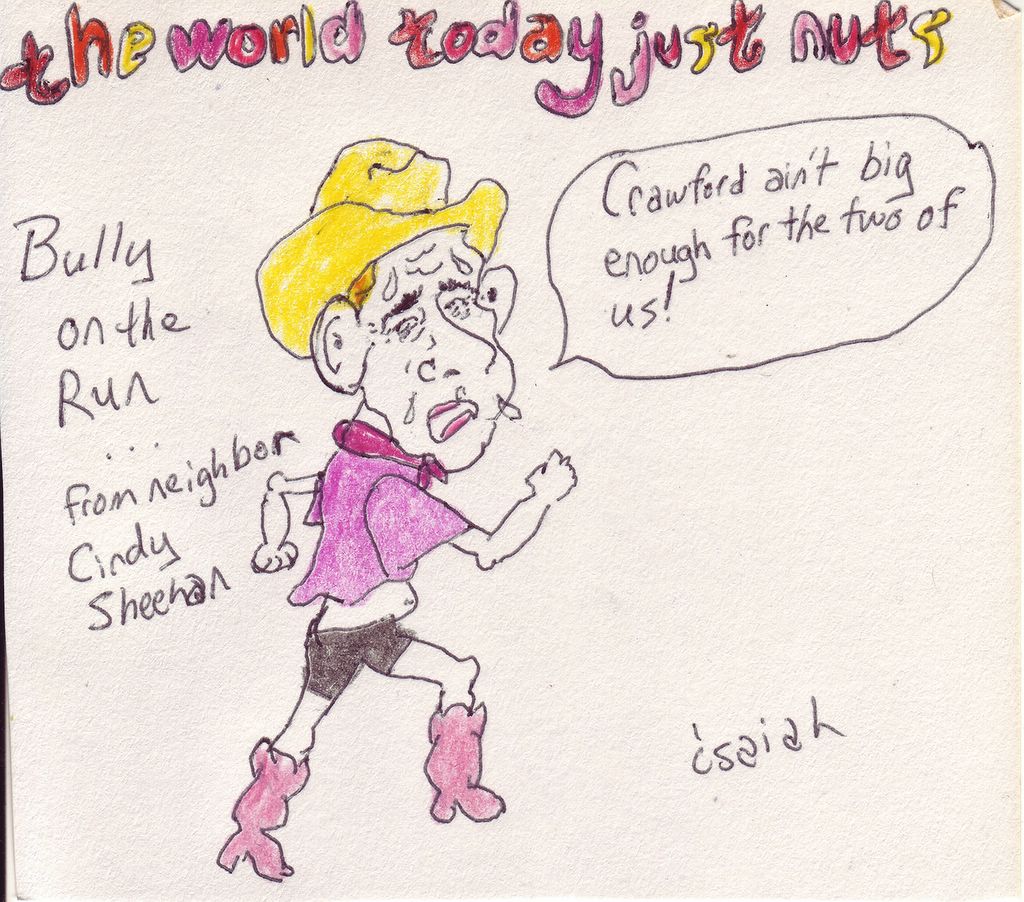 I paired "Isaiah's The World Today Just Nuts 'Bully Boy on the Run'" with the snapshot and credit to Wally for his "TROOPS CAN'T LEAVE IRAQ BUT BULLY BOY CAN RUN FROM CRAWFORD!" which gave me the idea. Do you get what's going on? You got a "Bully on the Run," a "Bully Boy on the run but the press is too busy playing Red Cross" ton note it. So Cindy Sheehan starts up Camp Casey III and Bully Boy goes on the run while the press goes AWOL.
There's only one story in the world, according to the press, and it's what Israel's doing in Lebanon and Gaza.

Cindy Sheehan reached me last summer, she reached a lot of people. But there's no time for her this year. Bully Boy and the press ignored her. That's especially sad if you grasp who I mean: the independent media. There's been more mainstream coverage of Camp Casey III than independent media coverage.

In "And the war drags on," C.I. mentioned that some had e-mailed that they'd seen Cindy Sheehan on their local news. I'm far from Texas and I got a report on it. I think most of us probably did. We saw Cindy speaking, we saw the campground and we probably all some speaking in favor of Cindy and some speaking against her. On the mainstream. On local news.
But independent media doesn't even care about it.

Camp Casey has started back up. Just because others treat it as a non story doesn't mean you should. Be glad that the mainstream media is covering it somewhat because we're getting zilch from the independent media.

Agree its like 'thanks for last year Cindy but we don't care anymore.' NObody cares about Iraq in the media, that's real obvious.

Word.
You said it all & then some Cedric.

That's Kat! Link to her comments! She's saying it all!

Said a mouthful. Keep screaming that truth to power. Holler!

Interesting stuff. Why is there no coverage of Iraq? Why is that? Check out my site if you do have time. Enjoyed much your site.

they just have to squeeze in all the stuff but iraq. no big surprise. lots of people talk big they just don't follow through. enjoyed your post. check out my site sometime.

Wonderful and informative web site. I used information from that site its great. » »