Cranky Clinton goes for a giggle

THE QUESTION THESE DAYS IS HOW WILL CRANKY CLINTON ANNOUNCE HER RUN FOR THE DEMOCRATIC PARTY'S PRESIDENTIAL NOMINATION AND ULTIMATE DEFEAT IN THE GENERAL ELECTION AS HER SCANDALS SINK HER RUN?

IN A MAJOR EXCLUSIVE -- MUST CREDIT  BULLY BOY PRESS &    CEDRIC'S BIG MIX  -- CRANKY CLINTON SPOKE TO THESE REPORTERS ABOUT JUST THAT.

"ON THE TOILET," SHE DECLARED GRINNING.

"I'M GOING TO ANNOUNCE MY RUN ON THE TOILET.  SEE, PEOPLE SAY I DON'T HAVE A SENSE OF HUMOR AND THOUGH I'D LIKE TO SLAP THEM IN THE FACE FOR SAYING THAT, THE TRUTH IS I CAN'T SLAP THAT MANY PEOPLE, I JUST DON'T HAVE THAT KIND OF TIME.  SO INSTEAD, I THOUGHT I'D HOP ON THE TOILET AND ANNOUNCE MY RUN THAT WAY.  PEOPLE LOVE BATHROOM HUMOR.  YOU KNOW THE ONLY BOOK BARBARA BUSH EVER OWNED WAS 'JOKES FOR THE JOHN'?  SO I FIGURE THAT'LL BE GOOD FOR S**TS AND GIGGLES."

BUT THOSE EXPECTING HILLARY TO HAVE ENTERED INTO SOME SORT OF BRIDESMAIDS WORLD SHOULD REST ASSURED THAT IT'S NOT ALL JOKES.

"AFTER THE LAUGHTER DIES DOWN," CRANKY EXPLAINED, "I INTEND TO FLUSH AND WAIT A MOMENT, A PAUSE, AND THEN SAY, 'BUT AMERICA IRRITABLE BOWEL SYNDROME IS NO LAUGHING MATTER.  IF I'M ELECTED PRESIDENT, I WILL EXPAND OBAMACARE TO ALSO COVER TOILET PAPER.  IF YOU CAN'T WIPE, YOU'RE NOT REALLY HEALTHY.'  SEE THE CAMPAIGN'S NOT ALL ABOUT ME, I'M RUNNING ON ACTUAL ISSUES."

So Wednesday, the Iraqi government again announced that Tikrit had been liberated:


"Here we come to you, Anbar! Here we come to you, Nineveh, and we say it with full resolution, confidence, and persistence."
That's Iraq's Minister of Defense Khalid al-Obeidi as quoted by the AP.
And yes, he does sound a bit like Howard Dean.
AP notes he dubbed today in Tikrit a "magnificent victory."
They're far too kind to note that yesterday was also dubbed a victory.
BBC News does note that, claims aside, "Troops are still fighting to clear the last remaining IS holdout in the city, but Prime Minister Haider al-Abadi was filmed raising an Iraqi flag there."

And from Thursday's snapshot:

Pro-government militiamen were seen looting shops in the centre of the Iraqi city of Tikrit on Wednesday after its recapture from the Islamic State jihadist group in a month-long battle.

The militiamen took items including clothing, shampoo and shaving cream from two shops in central Tikrit before driving away.

Iraqi Spring MC Tweeted about the militia looting and offered a photo: 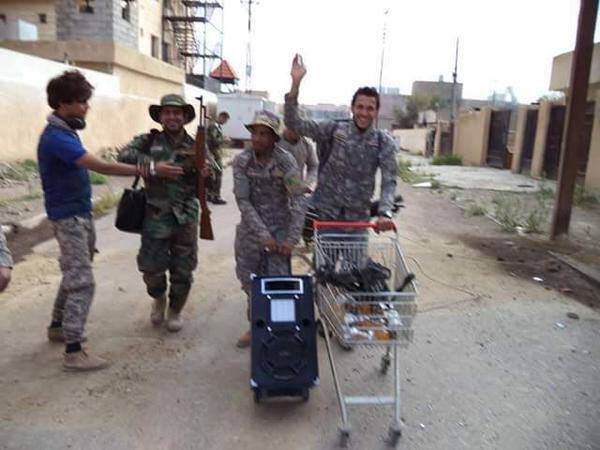 
Friday, AP reported that Prime Minister Haider al-Abadi announced Friday morning that the government "will begin arresting and prosecuting anyone who loots abandoned properties in the newly-recaptured city of Tikrit."  We noted it was a pass, that the law -- the existing law -- apparently does not take effect until 48 hours after liberation.

Today, Lydia Willgress (Daily Mail) notes, "Shia paramilitary fighters looting and setting fire to buildings in Tikrit are 'out of control', an official said.  Ahmed al-Karim, head of the Salahuddin provincial council, said the fighters had burnt 'hundreds of houses' in the last two days."  And Middle East Monitor reports:


Earlier, the Iraqi governor of Saladin left his own province in disgust over the looting spree being carried out allegedly by the Shia militia.
Ahmed Abdel-Jabbar al-Karim, chief of Saladin's provincial council, told the Anadolu Agency late Friday that he along with Governor Raed al-Jabouri left the province in protest against al-Hashid al-Shaabi's alleged looting and burning spree in Tikrit.
Al-Karim had also blamed the central Iraqi government of not doing enough to stop the militia's illegal actions. "Governor Raed al-Jabouri told Prime Minister Haidar al-Abadi about the violations and left the province when no stopped the militia from robbing and burning shops in Tikrit," he said.

According to al-Karim, the Shia militia also clashed with him and al-Jabouri when they tried to stop their rampage in central Tikrit. The militia men allegedly used abusive words, laced with sectarian references, with the senior Iraqi officials, which then quickly turned into a physical clash that left several body guards injured.


Hopefully, for the militia thugs, those clashes took place in the 48 hours when Haider al-Abadi was suspending the rule of law.

Let's be really clear that saying 'Starting now the law applies' is embarrassing.

Everyone who took part should be punished.

Deutshce Welle quotes Ahmed al-Kraim ("head of Tirkit's governing council") stating, "Houses and shops were burnt after they stole everything. Our city was burnt in front of our eyes."  Ned Parker, Michael Williams and Reuters correspondents in Tikrit report more specifically:

Near the charred, bullet-scarred government headquarters, two federal policemen flanked a suspected Islamic State fighter. Urged on by a furious mob, the two officers took out knives and repeatedly stabbed the man in the neck and slit his throat. The killing was witnessed by two Reuters correspondents.
The incident is now under investigation, interior ministry spokesman Brigadier General Saad Maan told Reuters.

Since its recapture two days ago, the Sunni city of Tikrit has been the scene of violence and looting. In addition to the killing of the extremist combatant, Reuters correspondents also saw a convoy of Shi'ite paramilitary fighters – the government's partners in liberating the city – drag a corpse through the streets behind their car.


No doubt Barack's special envoy John Allen will term the above "excesses."

As he did to Congress last week.

Posted by cedricsbigmix at 7:13 PM