Bully in the Beauty Parlor? 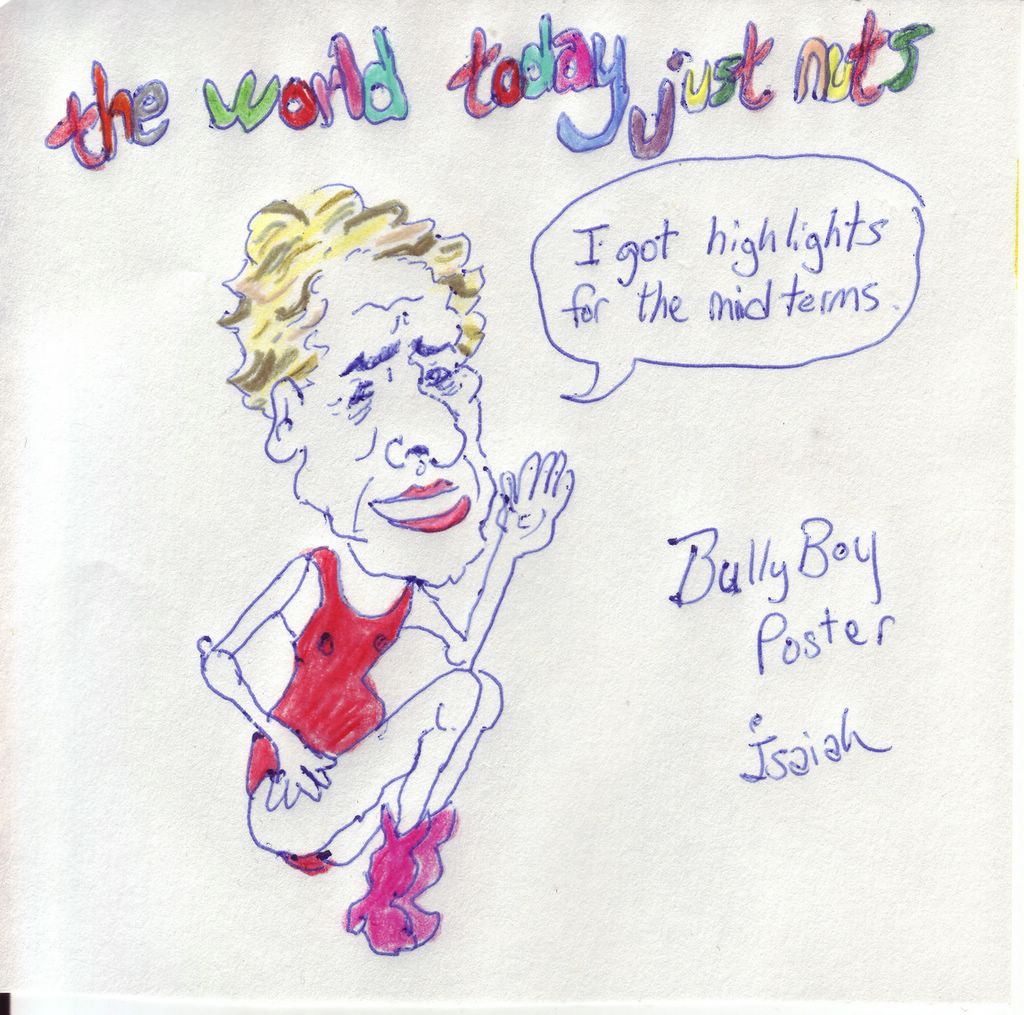 
WHEN TODAY'S EDITORIAL IN THE ARMY TIMES CALLS FOR THE ENFORCED RESIGNATION OR FIRING OF DONALD RUMSFELD WHAT'S A BULLY TO DO?

GET YOUR HAIR STREAKED.

BUT NOT CUT. YOU WANT TO LOOK LIKE YOUR BULLY MAMA.

MAYBE IT WILL TAKE YOUR MIND OFF YOUR WEIGHT GAIN?

MAYBE IT WILL LET YOU FORGET ABOUT THE CALLS TO FIRE DONALD RUMSFELD?

OR MAYBE YOU FOOLISHLY DREAM OF YOUR POSTER BEING HUNG BY WORK BENCHES IN GARAGES ACROSS THE NATION?

On Sunday, Tom Godfrey (Toronto Sun) broke the news that the Canadian government had denied refugee status to US war resister Tom Godfrey. Joshua Key became the third war resister denied asylum by the Canadian government. The two who came before, Jeremy Hinzman and Brandon Hughey, are still awaiting word of their appeal.
Key's case was seen as the strongest of the three due to what Key saw while serving in Iraq. One example can be found in Michelle Mason's documentary Breaking Ranks, where Johsua Key states: "As we got down the Euphrates River and we took a sharp right turn , all we seen was heads and bodies. And American troops in the middle of them saying 'we lost it.' As soon as I stepped and I walked out the back of my APC, I seen two American soldier kicking the head around like a soccer ball. I stepped right back inside the tank and I told my squad leader . . . 'I won't have no part of this'."

In December 2003, Joshua Key returned from Iraq on leave and decided to self-check out. He, Brandi Key (his wife) and their children moved to Philadelphia where they lived 'underground' with Joshua doing welding jobs and Brandi waiting tables. The story of Jeremy Hinzman's war resistance was something Joshua Key learned of online. In March of 2005, the Key family crossed the border into Candada where Joshua, Brandi and their four children have have made their home since.


Tom Godfrey (Toronto Sun) notes that Jeffrey House, the attorney for Joshua Key, states he's "filed refugee claims in Canada" for "[a]t least 35" war resisters. None have yet to be awarded refugee status by the Canadian government which is in stark contrast to the Vietnam era. House tells Godfrey that he believes Canada's Immigration and Refugee Board "doesn't want to hurt relationships with the U.S. by granting refugee status to deserters".


Information on war resistance within the military can be found at Center on Conscience & War, The Objector, The G.I. Rights Hotline, and the War Resisters Support Campaign. Courage to Resist offers information on all public war resisters.

Joshua Key, in his own words (France's Le Monde translated by New Socialist):

My name is Joshua Key. I was born in 1978 in Guthrie, in central Oklahoma. My family worked on a ranch. We had a hard time making ends meet, but I loved the outdoor life, amongs cowboys, and where we didn't have to wear shoes until we started school. I married Brandi after high school. We were the same age, and from the same background. I dreamt of becoming a welder, but I didn't have money for school. So I looked for work doing anything. But there was no future in Guthrie, which has no industry. We went to Wisconsin, then returned, as we found nothing. Our future seemed dim, and we already had two children. It was then I met the recruiters from the Army. It was February, 2002. They knew how to talk to me, that's for sure!


On the topic of military talk, Kyle Snyder remains 'underground.' Last Tuesday, US war resister Kyle Snyder turned himself in at Fort Knox after self-checking out and moving to Canada in April of 2005. Jim Fennerty, Synder's attorney, worked out an agreement regarding Snyder's return with the US military. Fennerty had done similar negotiations for war resister Darrell Anderson when he returned to the United States.
While Darrell Anderson had a Purple Heart and family members who would be actively and strongly making their voices heard, Kyle Snyder grew up in foster-care and appeared to have less of a support network than Anderson. Courage to Resist is asking supporters to call 502-624-2707 to speak to Major General Robert M. Williams and tell him "Discharge Kyle Snyder!" In addition, Brett Barroquere (AP) reported on the reaction in Canada to the US military burning Synder yet again and notes that war resisters Corey Glass and Patrick Hart have no faith currently in their own fates should they return.


Last Friday, Amy Goodman and Juan Gonzalez (Democracy Now!) interviewed Kyle Snyder who explained: "I had jointed the military October 22, 2003, and I had originally joined for basically, the verbal promises that were given to me at the time then, too. I was 19 years old." When the verbal promises were again broken last week, Kyle Snyder self-checked out again. Snyder, Hinzman, Key, Anderson, Glass, Hart and Hughey are part of a movement of war resistance within the US military that also includes Camilo Mejia, Pablo Paredes, Carl Webb, Stephen Funk, Aidan Delgado, Ricky Clousing, Mark Wilkerson, Ivan Brobeck, Robin Long, Ryan Johnson, Clifford Cornell, Katherine Jashniski, Agustin Aguayo and Kevin Benderman.

Recommended: "Iraq Snapshot"
"And the war drags on"
"18 US troops have died since the start of November"
"Isaiah's The World Today Just Nuts 'Bully Boy Poster'"
"NYT: John F. Burns offers an analytical look at Iraq"
"Other Items"
"US war resister Joshua Key denied refugee status"
"KPFA (C.I.)"
"Meatloaf in the Kitchen"
"Thomas Friedman enlists"
"Kyle Snyder, Iraq, Joshua Frank, Center for Constitutional Rights"
"Breast cancer and Iraq"
"abortion (or 'when he births a child out his butt, then i'll be interested in his opinion')"

"THIS JUST IN! DOES THE SENATE NEED MORE LIARS?"
"Tattle tale or liar? Neither should get a vote."
Posted by cedricsbigmix at 12:18 PM