Rumsfled, cakewalk it out of here (humor)


WHILE KYLE SNYDER, IVAN BROBECK, JOSHUA KEY AND OTHERS ARE NOT ALLOWED TO LEAVE, SECRETARY OF DEFENSE RUMSFLED SAILS OUT ON THE SAME GUST OF ILL WIND THAT PREVIOUSLY BLEW AWAY THE THEN SECRETARY OF STATE COLIN POWELL.

SECREATRY RUMSFLED WAS ASKED TO TENDER HIS RESIGNATION IN OCTOBER AND IT WAS IN A HOLDING PATTERN UNTIL THE ELECTION. PICTURED BELOW IN HAPPIER TIMES, RUMSFLED KNEW THAT HE WOULD HAVE A JOB ONLY IF THE U.S. CONGRESS REMAINED UNDER G.O.P. CONTROL. 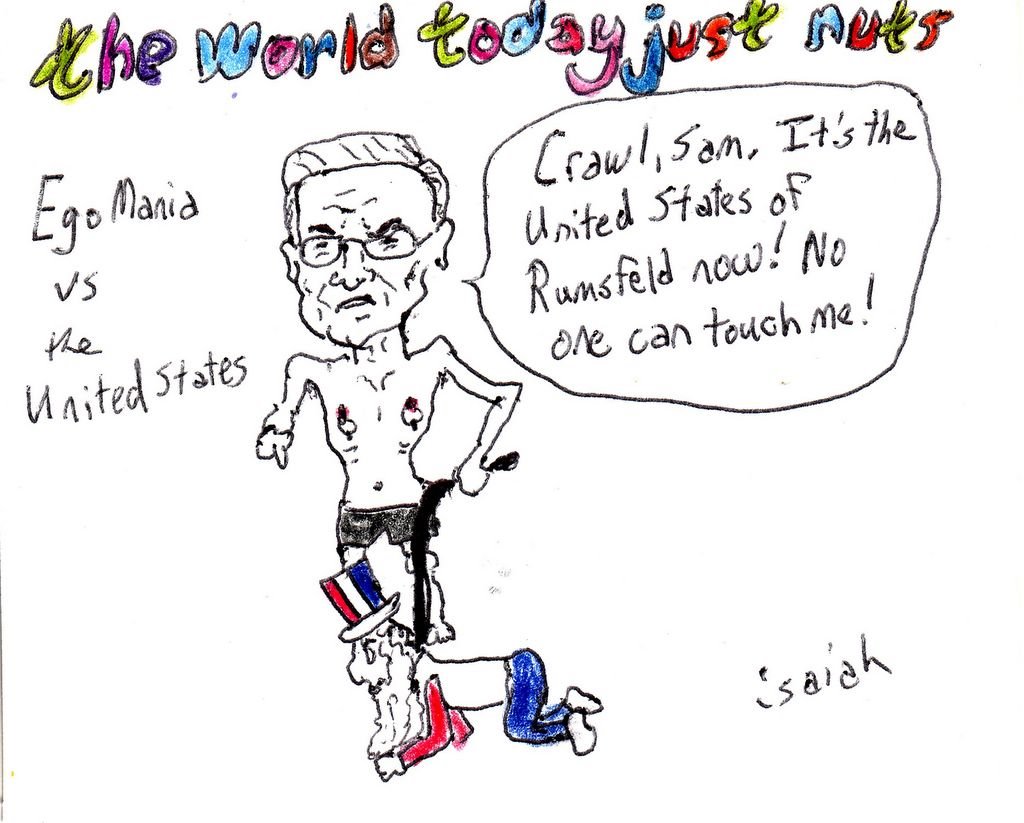 ALREADY BULLY BOY HAS NAMED HIS INTENDED REPLACEMENT: ROBERT GATES WHO HAS A LONG HISTORY OF SHAPING 'FACTS' TO FIT CONCLUSIONS.

WHETHER THE SENATE WILL PROBE 'EDUCATOR' GATES' LONG HISTORY IN THE CONFIRMATION PROCESS AT THIS POINT IS, AS ONE SOURCE TOLD US, "AN UNKNOWN. LOOK, THERE ARE KNOWNS AND THERE ARE UNKNOWNS. THERE'S NO NEED TO GET ALL HENNY PENNY IN THE SKY ABOUT IT. WE KEEP SEEING THAT SAME CLIP OVER AND OVER ON TV AND THE AVERAGE PERSON WATCHING IS THINKING 'MY GOODNESS HOW MANY SECRETARIES OF DEFENSE DOES THIS COUNTRY HAVE?' IT'S JUST ONE SECRETARY OF DEFENSE."


OUR SOURCE THEN STATED, FOR THE RECORD (BUT NOT TO BE ATTRIBUTED), THAT "DONALD RUMSFELD WAS THE BEST DARN, ROOTIN', TOOTIN' SECRETARY OF DEFENSE THIS NATION WILL EVER HAVE. HE WAS SMART, HE WAS STRONG, HE HAD A HOT ASS. WHO COULD ASK FOR MORE? HE'LL BE FINE, THIS DONALD RUMSFELD IS A VERY STRONG FELLOW, TRUST ME. NOW YOU'LL HAVE TO EXCUSE ME BECAUSE CONDI'S OFFERED TO TAKE ME TO AN ACTUAL CAKEWALK SO I CAN SEE WHAT THAT'S REALLY LIKE."

For those looking for attempts to make sense of the election (something that really won't happen until all the votes are in and data crunched -- as opposed to skimmed) should refer to Amy Goodman's interview with Ralph Nader (Democracy Now!) and the Feminist Majority blog on the elections. [Feminist Wire addresses the failed abortion ban in South Dakota.] While the White House's message may have been lost on the puppet leaders, Nancy A. Yousseff (McClatchey Newspapers) reports that "Iraqis outside the world of politics saw no change, regardless of the results" as Matthew Schofield (McClatchy Newspapers) reports that the reaction was far different for Europeans who are now "a bit more comfortable with their partners across the Atlantic after five years of unease with Americans under the Bush administration." What is known is that the Democratic Party now holds the most seats in the US House of Representatives and may control the Senate provided the candidates in Montana and Virginia (Jon Tester, Jim Webb) hold their leads. In Iraq today, Zalmay Khalilzad rushed to spin telling a reception in the heavily fortified Green Zone (reception made up of reporters, the puppet government, "American colleagues from the embassy," etc) that "Americans understand that Iraq is import. They understand that this region is important" blah, blah, blah. When even Zalmay-Take-Me-Away grew tired of his own voice, he signed off with "Thank you again for coming and my God bless the people of Iraq" which may not be the best way for American officials, supposedly wanting a secetarian government in Iraq, to conclude their 'official' messages. Reality absent in the rumored to be departing soon Zalmay's pontificating can be found in Missy Comley Beattie's latest (CounterPunch): "This historic smackdown of an arrogant president and his administration will not bring back my nephew, Marine Lance Cpl. Chase Comley, his fellow servicemen and women who have died during the illegal invasion and occupation of Iraq, other dead coalition troops, and so many Iraqis. . . . Nothing can reverse the effects of madmen. The hearts of our dead cannot restart. Limbs can't be restored. Devastating brain damage won't heal."
[. . .]

In peace news, Chris Arsenault (The Dominion) takes a look at US war resister Corey Glass currently in Canada, at the War Resisters Support Campaign and notes that depite the petition with 35,000 signatures "demanding Canada treat Iraq War objectors the same way we treated Vietnam War resisters . . . the immigration and refugee board, whose mandate is different from the courts, has" refused to rule in favor of asylum for war resisters. Glass tells Arsenault: "I signed up to defend people and do humanitarian work filling sandbags if there was a hurricane; I should have been in New Orleans, not Iraq." Three other war resisters who went to Canada include Kyle Snyder who turned himself in at Fort Knox on October 31st only to self-check out again after the US military lied to him again, Joshua Key who was denied refugee status by the Canadian government and Ivan Brobeck who returned to the US yesterday to turn himself in.Meanwhile, Gladys Tericho (Mennoite Central Committee) reports on the conference on conscientious objection held October 20-21 and bringing together groups "including Mennoite, Doukhobor, Quaker and Jehovah's Witnesses." She notes Harry Loewen (Professor Emeritus of Mennonite History and Studies at the University of Winnipeg") stating: "It is important that we deal with these issues now. . . . This principle must not be abandoned, it must be strengthened."

Recommended: "Iraq snapshot"
"Ruth's Report"
"Other Items"
"Resistance is futile -- or at least the independent media coverage is"
"Tuesday. If you don't know what today is, go to t..."
"gas bagging about the elections"
"Ivan Brobeck, Rolling Stones and a rip-off pig"
"THIS JUST IN! BULLY BOY STINKS!"
"See how they run, Bully Boy's done"
Posted by cedricsbigmix at 1:43 PM