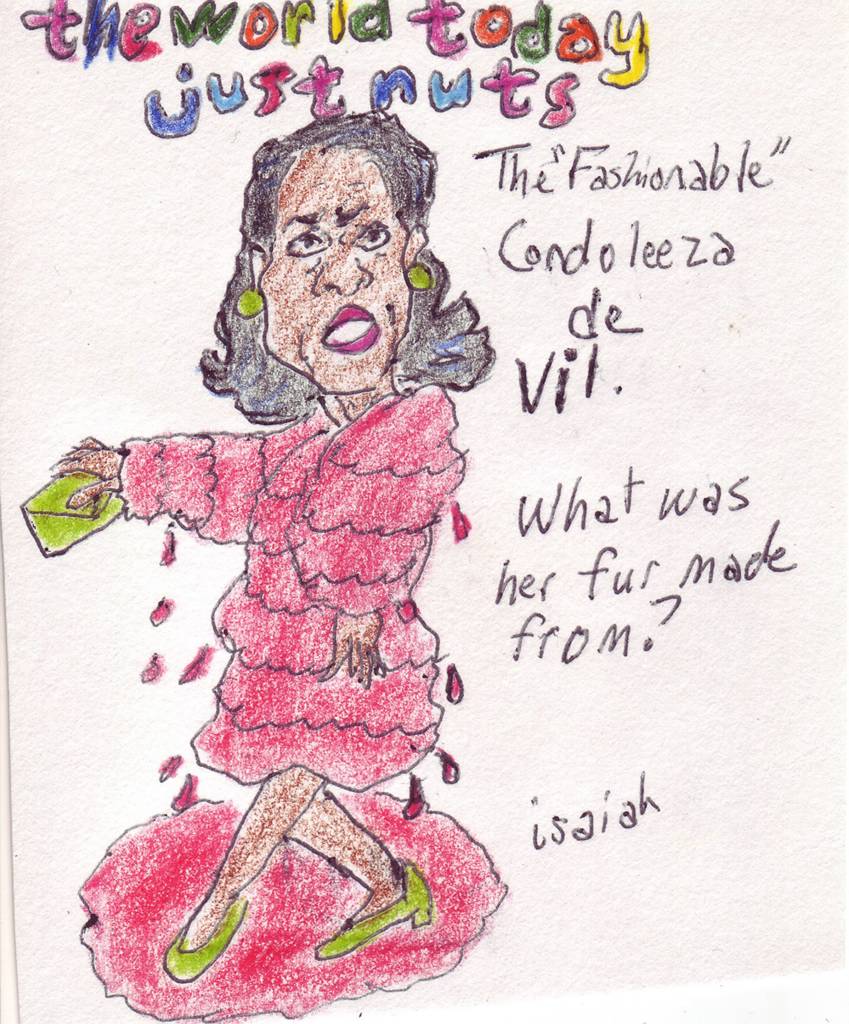 Rebecca did a thing with links to some of Isaiah's The World Today Just Nuts comics. "Three cool old guys" (as they want to be known) loved going through the comics and they picked the one that's up here now.

They chose it because they say Condi Rice has blood on her hands and while they used to long to see a brother or a sister in position of power, she wasn't what they had in mind.

But they say it is an affront to MLK and his memory that someone like her hasn't been fired. They think she's as bad as gangsta-thug shooting up things in drive bys if not worse. The minute she took a job with the administration, they feel, her focus should have been on representing the ones who laid down so much that she could get to where she is. Instead they think she's become the white man's puppet and embarrassed herself and her race.

They are so offended by her. I'm offended and embarrassed by her but it's one thing to hear and read about all the work that took to get us this far. It's another thing to have lived through all those struggles.

The worst thing is that we have struggles ahead of us still because we haven't achieved equality and someone like Condi is no help to us. She'll remember her skin color when she's getting an award for "black achievement" but she'll never do a thing to help us. She's the token who's happy being the token.

That doesn't surprise me. But it didn't bother me anymore than Donald Rumsfeld did. Talking to them tonight I realized how severe a disappointment to her race Condi Rice is.

C.I. noted this and my friends at the nursing home, who want to be called "Three Cool Old Guys," said I should note it too. So Three Cool Old Guys were watching Democracy Now! on the main TV and they saw the last story, "Sonia Bock 1897-2005: Amy Goodman Remembers Her Grandmother, a Woman of Three Centuries," and thought it was pretty moving. I think so too. I don't have much time tonight but when my friends want something, they've got it.


Amy Goodman's grandmother, Sonia Bock, died October 5, 2005 at the age of 108. She was born in 1897, in Ruvno, Poland. She lived through the pogroms of Tsarist Russia, the Bolshevik revolution and the Holocaust.
I'd like to take this moment to thank everyone who wrote in last week to express sympathy on the loss of my grandmother. Sonia Bock died October 5, 2005 at the age of 108. Yes, she was indomitable: a woman of three centuries.
She was born in 1897, in Ruvno, Poland. She lived through Tsarist Russia, the Bolshevik revolution, the Holocaust. Though many in her family did not. Two of her brothers and their whole families perished. I remember my mother telling me the wail. The wail that went up in the bungalow colony that my grandparents my mom and her sister went to every summer. The wail when my grandmother got the news that her family had been killed. She came to America by boat in 1929. In 1930, she gave birth to my mother in Harlem with my grandfather, an orthodox rabbi.
In her fifties she contracted cerebral meningitis and was sent to a sanatorium in the Catskills. Not expected to live, she cut everyone's hair and was out in two years. She was an unusual mix of old fashioned in her views of women. "You must always be independent," she would say. "When your husband comes home meet him with a hug and supper, then give him the newspaper to read, but you should have already read it. Then discuss it with him. Communication is everything." She was the eternal student. She spoke four languages: Russian, Yiddish, Hebrew, English and was always taking conversation classes in French. At about 4 foot 10 inches tall, she was a pint size fireball. A life force. My heart. I'd like to share a poem that I also read when my father died. I don't know who wrote it: