YOU BETTER CALL HIM "KING!"

ON THURSDAY, FEDERAL JUDGE ANNA DIGS TAYLOR RULED THAT "IT WAS NEVER THE INTENT OF THE FRAMERS TO GIVE THE PRESIDENT SUCH UNFETTERED CONTROL. . . . THERE ARE NO HEREDITARY KINGS IN AMERICA AND NO POWERS NOT CREATED BY THE CONSTITUTION. SO ALL 'INHERENT POWERS' MUST DERIVE FROM THAT CONSTITUTION."

BULLY BOY BLASTED THE DECISION, JABBING HIS FINGER IN THE AIR REPEATEDLY AS THOUGH HE WERE ATTEMPTING TO POKE AN EYE OUT AND SNARLING, "I STRONGLY DISAGREE WITH THAT DECISION, STRONGLY DISAGREE. THAT'S WHY I INSTRUCTED THE JUSTICE DEPARTMENT TO APPEAL IMMEDIATELY, AND I BELIEVE OUR APPEALS WILL BE UPHELD."

WITH THAT, BULLY BOY STORMED OFF LEAVING WHITE HOUSE TONGUE TONY SNOW TO EXPLAIN, "HIS ROYAL HIGHNESS HAS LEFT THE BUILDING."

Recommended: "Iraq Snapshot"
"Walking Through Watada (Ehren Watada's Article 32 hearing)""And the war drags on""NYT: 'Inquiry Suggests Marines Excised Files on Killings' (David S. Cloud)"
"Living With War"
"failing grade"
"I guess on days like these, you know who your friends are"
"Who stepped up to the plate for Ehren Watada and who took a dive?"
"Bully Boy's new spy plans (humor)"
"THIS JUST IN! NEW SPY PLAN FOR BULLY BOY!"
"U.S.: Civilian deaths feeding insurgency"
Posted by cedricsbigmix at 5:20 PM 9 comments:

SPEAKING TO REPORTERS AT A PRESS CONFERENCE AFTER THE RULING ATTORNEY GENERAL ALBERTO GONZALES PLAYED IT CLOSE TO THE VEST NOTING THAT "WE WILL CONTINUE TO UTILIZE THE PROGRAM" WHILE NOT SPECIFIYING HOW.

WE HAVE LEARNED FROM A FORMER WHITE HOUSE OFFICIAL, NOT SCOTTY MCCLELLAN WE SWEAR, THAT GONZALES AND THE BULLY BOY INTEND TO IMPLEMENT MASSIVE PANTY RAIDS ON CITIZENS THROUGHOUT THE LAND.

AS THE PHOTO BELOW DEMONSTRATE, GONZALES AND THE BULLY BOY HAVE ALREADY CONDUCTED AT LEAST ONE ILLEGAL PANTY RAID. 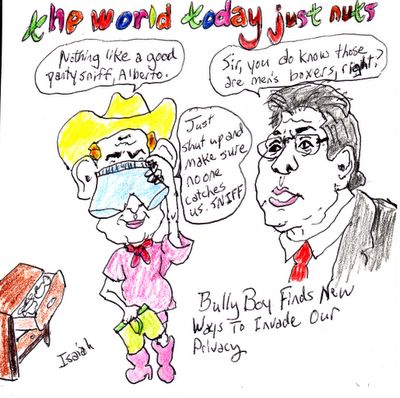 ON JUNE 27TH, BULLY BOY PRESS FIRST BROKE THE NEWS OF SENIOR CITIZENS JOHN AND JANET SMITH OF DUNNELLON, FLORIDA WHO WERE THE VICTIMS OF A WHITE HOUSE PANTY SNIFF.

OUR SOURCE, THE FORMER WHITE HOUSE OFFICIAL, SAYS "FOLLOW THE SMELL TRAIL" AND INDICATES THAT BULLY BOY HAS A SPECIAL INTEREST IN THONGS AND JOCK STRAPS.

THOUGH ONCE A WEEK WASHERS MAY BE CAUGHT OFF GUARD, YOU HAVE BEEN WARNED.

Recommended: "Iraq Snapshot"
"NYT: July saw more roadside bombs than any other -- attacks on American troops double since Jan."
"Ehren Watada's Article 32 Hearing Starts Today"
"A lady never gobbles? Thomas Friedman does"
"Tired""Are you getting the word out on Ehren Watada?"
"And in the end, the love you . . ."
"get the word out on ehren watada - don't count on the desk jockeys"
"Bully Boy offers Ehren Watada some tips (humor)"
"THIS JUST IN! BULLY BOY HAS SOME TIPS FOR EHREN WATADA!"
"U.S.: Civilian deaths feeding insurgency"
"Resister's fight shif ts to court today"
"Soldier who wouldn't deploy faces court"
Posted by cedricsbigmix at 2:59 PM No comments:

ENNUI RIDDEN BULLY BOY HAS SOME TIPS FOR EHREN WATADA!

WATADA IS THE FIRST COMMISSIONED OFFICER KNOWN TO REFUSE TO DEPLOY TO IRAQ.

"I JUST OBJECT TO HIS WAY OF DOING THINGS," BULLY BOY SAID SNACKING ON A 5TH SLICE OF CHEESE CAKE. "IF HE DOESN'T WANT TO SERVE, HE DOESN'T HAVE TO."

WAS BULLY BOY SAYING HE WOULD MOVE TO STOP THE ARTICLE 32 HEARING AGAINST EHREN WATADA?


"NO, NO, NO," BULLY BOY LAUGHED REACHING FOR A DIET SODA.


"I'M TRYING TO WATCH THE CALORIES" HE EXPLAINED WHILE HOLLERING AT DONALD RUMSFELD TO "BRING ON THAT POUND CAKE!"


LEANING IN, BULLY BOY WHISPERED, "HE'S A COMPLETE DISASTER BUT ONE TASTE OF HIS LEMON POUND CAKE AND YOU'LL UNDERSTAND WHY I KEEP HIM AROUND."


THESE REPORTERS JUDGED THE POUND CAKE ONLY SO-SO.

BUT WE WERE EAGER TO GET BACK TO THE SUBJECT OF EHREN WATADA.


"YEAH, YEAH, YEAH," BULLY BOY SAID NODDING AND REACHING FOR OUR UNFINISHED SLICES OF POUND CAKE. "HE JUST HANDLED IT ALL WRONG. HE DIDN'T HAVE TO MAKE A BIG STINK OUT OF IT. HE DIDN'T WANT TO GO, HE JUST SHOULD HAVE NOT GONE."

BUT, THESE TWO REPORTERS REMINDED THE BULLY BOY OF THE UNITED STATES, IF EHREN WATADA HAD REFUSED TO GO HE WOULD, AS HE IS NOW, BE FACING AN ARTICLE 32 HEARING.

AFTER HOLLERING AT SECRETARY OF DEFENSE AND APPARENT JULIA-CHILD- IN-THE-MAKING DONALD RUMSFELD IF "THEM LEMON ICE BOX COOKIES ARE READY YET, HON?" BULLY BOY TURNED HIS ATTENTION TO EHREN WATADA.


"NOW LOOKSIE HERE," HE SAID TAPPING HIS FOOT, EITHER DUE TO IMPATIENCE OR A SUGAR RUSH, "WE GOT A WAY OF DOING THINGS DOWN IN MAINE WHERE THE MEN ARE UPPER CRUST AND THE GALS KNOWS IT. YOU DON'T WANT TO SERVE, YOU DON'T GOT TO. YOU JUST CALL YOUR DADDY AND GO, 'DADDY, I DON'T WANT TO SERVE, GET ME OUT OF THIS.' IT'S WHAT I DID. IT'S WHAT I DID. THAT'S HOW YOU DO IT. YOU JUST MOSEY UP TO THE COUNTRY CLUB AND TELL YOUR DADDY TO GET YOU OUT AND HE DOES IT. NO NEED FOR A FUSS OR A SCENE."

THESE REPORTERS STARED AT ONE ANOTHER IN SILENCE AND SHOCK GRASPING THE NATURE OF THE SCOOP WE HAD JUST RECIEVED -- AND DIRECTLY FROM THE ASS'S MOUTH.

SPEAKING TO THE PRESS AT THE NATIONAL COUNTERTERRORISM CENTER IN NORTHERN VIRGINIA BULLY BOY DECLARED: "AMERICA IS SAFER . . . YET IT IS NOT YET SAFE."

AFTER 6 YEARS KIND-OF, SORT-OF ON THE JOB, BULLY BOY'S STATEMENTS WERE A DAMNING CONFESSION OF HIS OWN INCOMPETENCE AND INABILITY, EVEN POST 9-11, TO PROVIDE SECURITY.

THE STATEMENTS WERE MADE AT THE UNDISCLOSED LOCATION OF THE NATIONAL COUNTERRORISM CENTER DESCRIBED AS CONTAINING "HUNDREDS OF GOVERNMENT EXPERTS AND MORE THAN TWO DOZEN COMPUTER NETWORKS . . . HIGH-TECH, 24-HOUR OPERATIONS CENTER . . ."

IT'S NOT ALL THAT IMPRESSIVE.


IN A BULLY BOY PRESS & CEDRIC'S BIX MIX EXCLUSIVE, WE REVEAL THE LOCATION OF THE OPERATIONS CENTER.

THE "OPERATIONS CENTER" IS LOCATED AT 1233 RICHMOND ROAD IN WILLIAMSBURG VIRGINIA. THE SPECIFIC ROOM AT THIS SUPER 8 MOTEL (COLONIAL!) CHANGES DEPENDING UPON WHO'S BOOKING THAT MONTH.

DICK CHENEY PREFERS ONE AWAY FROM THE ROAD, FACING THE FOREST SO THAT HE CAN JUST AIM A RIFLE OUT THE WINDOW WHEN HE'S READY TO "PLAY SPORTSMAN" -- ALSO HIS EXCUSE FOR TRYING TO USE THE POOL AS A TOILET FROM THE 2ND FLOOR RAILING.

THE INCLUSION OF BLOW DRYERS IN EVERY ROOM WERE SAID TO BE THE DECIDING FACTOR FOR THE INTERNATIONAL BILLIE JEAN KING LOOK ALIKE ALBERTO GONZALES. CONDI RICE IS SAID TO BE IMPRESSED WITH THE "CONTINENTAL BREAKFAST" (WHICH MEANS "NOTHING HOT SERVED BUT COFFEE") WHILE DONALD "RUMMY" RUMSFELD LIKED THE FACT THAT IT WAS IN WALKING DISTANCE OF MANY TAVERNS.


Recommended: "Iraq Snapshot"
"'We have all seen this war tear apart our country over the past three years' (Ehren Watada)"
"Other Items"
"NYT: 'Speaker of Iraqi Parliament May Step Down' (Edward Wong)"
"2600 u.s. troops dead the a.p. announced saturday"
"The KPFA Evening News had several reports on Iraq tonight"
"Time goes by very quickly these days"
"KPFA reported on the war resisters in Canada"
"Tell Rumsfeld 'Hands off Ehren Watada! Let him go.'"
"THIS JUST IN! BULLY BOY SHUTS OUT THE PRESS! TO LITTLE OUTCRY!"
"Ehren Watada"
Posted by cedricsbigmix at 12:50 PM No comments:

You may think, "Ehren Watada's hearing starts Thursday" (it does) "so what good will this do? My letter probably won't get to Rumsfeld in time!" Call or write. Do it. This hearing will probably last more than one day and wouldn't it be great if we all wrote Rumsfeld and he had all these letters piled up? Or all these messages? Or both? Maybe you aren't the protesting type? Maybe you need something else? You can call or you can write. You can say a lot or you can just say: "Hands off Ehren Watada! Let him go."

I'm serious, call or write (or both) and say at least that much. Let Rumsfeld know that Ehren Watada has support, that we're out here and we support him.

Don't think you can do it? You think it's easy for him to do what he's doing? Or for his parents to stand by him? They're doing what they need to and you need to do what you need to.

You can be silent and then, after the verdict, wonder what you could have done or what would have happened if you'd done something. Or you can get active right now.

Watada needs our help and our support and it doesn't look like he'll be getting it from independent media. (No Iraq on Democracy Now today other than the headline, did you notice?) (C.I. likes the show still and does listen. When it came on, C.I. said, "I'll change it if you want." Which was silly because it's C.I.'s house and silly because C.I. should be able to listen to whatever. I listened with and criticized throughout. There's no support for Watada on that show and if this continues, I'll be very vocal about my disgust here.) (I also told C.I., "It's your business whether you highlight it at The Common Ills or not." But C.I. says the community wouldn't stand for it -- come on guys and gals, are we that angry still? -- and that The Common Ills is about the community, not about "what I want.")

Are we going to wait for someone to rescue the movement or are we going to rescue ourselves? We can do this. We can make it known that we are behind Ehren Watada, that we support him and that he's not alone.

Say "Hands off Ehren Watada. Let him go." Say more. Speak from your heart, appeal to Rumsfeld's better nature, whatever works for you. But make your voice herad.
Posted by cedricsbigmix at 5:24 PM 1 comment: