Will Kevin hand him a rose?

AFTER BEING CONFRONTED ON BIG MONEY FUNDRAISERS IN WINE CAVES THROWN BY A MAN WHO ATTACKS THE ENVIRONMENT, TINY PETE DECIDED TO REGULAR-GUY IT AND WHAT BETTER WAY THAN TO HAVE A MAN WORTH $250 MILLION, KEVIN COSTNER, CARRY HIM? 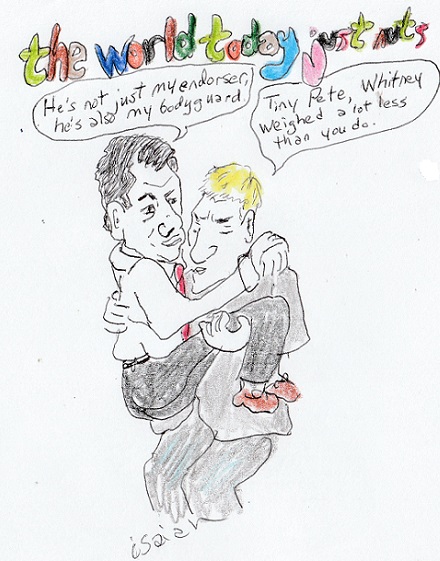 REACHED FOR COMMENT, TINY PETE RESPONDED, "BITTER SWEET MEMORIES IS ALL I'M TAKING WITH ME."

Jake Johnson winds down the year on a high note of stupidity as he plays high drama that Donald Trump Tweeted a link to the article that names the "whistle-blower."

He is leaking.  That's what he's done since Donald Trump was elected.

Secondly, he has no legal protection from the press which should be naming him.  This month alone, THE NEW YORK POST has named him (finally) as has JACOBIN in an article by economist Doug Henwood.

We've noted it here before.

There is no legal protection of your anonymity when your statements lead to impeachment.  The American people have the right to determine everything -- this is a democracy, grow the F**K up -- and everything includes the accuser.  In addition, in the US, our legal system is built around the premise that there are no secret accusers.  You make an accusation in court -- or to the House -- you don't get to hide in the shadows.

Your accusation is your claim and We The People have every right to judge that claim based on you and what we can determine about your character.

We've been nice and we've highlighting COMMON DREAMS again and pretending that they didn't waste 8 f**king years while Barack was president.

They didn't lead on issues, they didn't defend the American people, they instead ran interference for Barack Obama.  I'm not a whore and I'm not a slut.  If someone has the Secret Service, seems to me they have enough protection.  I don't have to baby them, I don't have to coddle them.

So if Jake Johnson wants to offer that bulls**t, we can walk away from that website with no problems at all.  It's not like it's doing groundbreaking work.  I've just been tossing them a line.  I don't have to do that.

And, point of fact, I won't do that if they're pushing bulls**t like this to begin with.

Eric Ciaramella.  Jake Johnson and COMMON DREAMS, there are two choices here: Grow up or shut the f**k up.  This is a democracy and you're not helping anyone at present with your bulls**t pretense that naming a leaker is against the law.

We should all have the facts on him and we should able to determine his character based upon those facts.

His attacking Trump -- and that's what gossip Eric supplied was -- does not make that s**thole a friend of the left and shame on anyone who tries to pretend otherwise.

And on that note, Michael Winship stop sending your crap to the public account of this site.  I haven't highlighted you in years.  You're a cheap whore.

Now you could have redeemed yourself.  How?  You could have written about the deep state.  Remember when Bill Moyers -- your boss -- had a program on PBS?  Bill often addressed the deep state and that goes all the way back to the eighties.

Just because Donald invokes it today does not mean we should look away or give it a pass.

Bill Moyers is a homophobic bigot -- he even put that homophobia on the airwaves in 2008 -- we called him out on it but it sailed over the heads of many.  Just like his past in LBJ's administration where Bill couldn't keep his nose out of other men's beds and constantly told LBJ to drop this person or that person because the man was gay.

That's all Bill is now, a homophobic bigot.  And he's only that because he's turned away from the one legitimate contribution he made to a discussion -- his research and work on the deep state.  By failing to enter into the current conversation, he demonstrates yet again that he has never been a journalist, he has only been a partisan in front of microphone.

We don't have time for this crap.  We have real issues in the world.  And we can walk away from garbage like promoting anti-Muslim, anti-woman Michael Moore which COMMON DREAMS is also doing today.  This is garbage.  There are real life issues to cover.  I am appalled by what passes for the left in this country right now.