REPUBLICAN CONGRESS MEMBER MARK FOLEY HAS ANNOUNCED HE IS RETIRING FROM CONGRESS ASAP.

THE ANNOUNCEMENT COMES A DAY AFTER ABC OBTAINED E-MAILS SENT FROM FOLEY TO A 16 YEAR-OLD INTERN. THE INTERN APPARENTLY WAS BOTHERED BY THE E-MAILS AND HE TURNED THEM OVER TO OTHERS.

IN 1994, AFTER HE SUPPORTED THE DEFENSE OF MARRIAGE ACT (AKA: "NO GAYS ALLOWED"), SPECULATION RAN RAMPANT ABOUT FOLEY'S OWN LIFE AND FOLEY DISMISSED THEM SAYING, "FRANKLY, I DON'T THINK WHAT KIND OF PERSONAL RELATIONSHIPS I HAVE IN MY PRIVATE LIFE IS OF ANY RELEVANCE TO ANYONE ELSE."

ABC CLAIMS THE E-MAILS ARE "SEXUALLY EXPLICIT." AND, SINCE FOLEY HAS CHAMPIONED LEGISLATION TO PROTECT MINORS ONLINE, IT SHOULD BE NOTED THE INTERN HE WAS E-MAILING WAS 16 YEARS-OLD. FOLEY ALSO VOTED FOR 2 OF THE 4 IMPEACHMENT CHARGES AGAINST BILL CLINTON.

WHEN APPROACHED BY THESE REPORTERS, FOLEY ATTEMPTED TO OUT RACE US. AFTER IT BECAME OBVIOUS THAT HE COULD NOT SHAKE US, FOLEY AGREED TO BRIEF QUESTIONS.

DID FOLEY HAVE RELATIONS WITH THE BOY?

"POPPY COCK!" SNAPPED FOLEY BEFORE WORRYING OVER HOW "POPPY COCK" MIGHT SOUND.

"I NEVER ONCE POSED AS SOMEONE IN AFRICA WITH LUNG CANCER WHO WOULD TRANSFER MY FORTUNES TO THE CHILD IF HE WOULD JUST SEND ME HIS BANKING INFORMATION."

THEN WHAT IS ABC CLAIMING THEY HAVE, WHAT ARE THEY PLANNING TO BUILD THIS EVENING'S WORLD NEWS TONIGHT AROUND?

FOLEY SWORE HE HAD NO IDEA AND INSISTED HE HAD TO LEAVE. SHORTLY AFTER, HE CAME BACK OVER TO THESE REPORTERS AND REQUESTED "THE E-MAIL ADDRESS FOR THE BLOND." THE BLOND (WALLY) THANKED HIM FOR THE INTEREST BUT SAID "NO, THANK YOU."


Recommended: "Iraq Snapshot"
"And the war drags on"
"NYT: 'After Burst of Violence, as Many as 60 Bodies Are Found in Baghdad' (Michael Luo)"
"Other Items"
"Editorial: Darrell Anderson Needs You."
"We Had Abortions" petition
"dirty depends wind down and repubes soil themselves again"
"Tired"
"Bully Boy enjoys his rampages (humor)"
"THIS JUST IN! BULLY BOY: RAMPAGE FREE!"
Posted by cedricsbigmix at 2:01 PM No comments:

TODAY AT A FUNDRAISER, WHERE BULLY BOY ALWAYS MAKES HIS MOST IMPORTANT STATEMENTS, BULLY BOY DECRIED THE DEMOCRATIC PARTY AS
THE "PARTY OF CUT-AND-RUN" AND CALLED THEM "OSBSTRUCTIONIST."

THE CONFLICT STEMS FROM THE FACT THAT THE RECENTLY SURFACED NIE REVEALS THAT BULLY BOY'S ILLEGAL WAR IN IRAQ HAS NOT ONLY ACTED AS A BREEDING GROUND FOR TERRORISM, IT HAS ALSO LEFT LASTING SCARS IN THE MUSLIM WORLD.

BULLY BOY EXPLAINED IT TO THESE REPORTERS, "SO WHAT, YOU KNOW, SO WHAT? I LIKE TO BLOW OFF A LITTLE STEAM. I'M THE KING AND THAT MEANS I GET TO DO WHAT I WANT. YOU DON'T LIKE IT, F--K OFF. REALLY. WHO CARES IF I HAVE MADE THINGS WORSE? WHO SAYS I DIDN'T WANT TO DO THAT? IT'S MY PARTY, YEE-HAW!"

IN BIRMINGHAM, ALABAMA, BULLY BOY HELD HANDS WITH BOB RILEY WHO IS NOW RUNNING TO BE RE-ELECTED GOVERNOR OF ALABAMA AND WILL HAVE A GOOD GO OF IT PROVIDED NO ONE LOOKS TO CLOSELY TO HIS OWN INVOLVEMENT IN THE JACK ABRAMOFF LOBBYING/PAYOLA SCANDAL.

AT THE END OF THE FUNDRAISE, BULLY BOY WARBLED HIS OWN SIGNATURE SONG:

RAMPAGE FREE WHERE NO WALLS PROTECT THEM
RAMPAGE FREE, HURRICANE KATRINA, NEGLECT THEM
SO THERE'S NO WHERE TO HIDE

RAMPAGE FREE AND DEATH IS WORTH GIVING
SHARING AND GIVING
CAUSE I WILL RAMPAGE FREE
. . .

WITH A BUBBLE MACHINE AND A BACKBEAT, BULLY BOY DOES A DANCE OF THE FEATHERS AS HE PLAYS PEAK-A-BOO WITH THE NATIONAL INTELLIGENCE ESTIMATE.

AFTER ASSERTING YESTERDAY THAT THE PEOPLE COULD DECIDE FOR THEMSELVES, BULLY BOY RELEASES APPROXIMATELY 3 OUT OF 30 PAGES THAT HIS ADMINISTRATION HAS PRE-DETERMINED IS "SAFE" FOR AMERICA TO DECIDE.

WITH A BUMP AND THE GRIND, BULLY BOY LEAVES THE STAGE.

WITH REGARDS TO THE TAX PAYER PAID FOR NIE, WILL THE AMERICAN PEOPLE DEMAND FULL FRONTAL?


Recommended: "Iraq snapshot"
"NYT: Where is the news?"
"Iraq -- Rockwell, Hayden, Jamal and Cheryl Lindsey Seelhoff"
"Other Items"
"a different way of arguing?"
"Barenaked Ladies, Iraq and more"
"Darrell Anderson returns to the US Saturday, KPFA discusses war resisters tomorrow"
"Betty with a note""Super Freaking Don't Leave Time for Much Else (humor)"
"THIS JUST IN! CONDI PUTS ASIDE HER READING AGAIN!"
Posted by cedricsbigmix at 3:30 PM No comments:

Super Freaking Don't Leave Time for Much Else (humor)

CONDI PUTS ASIDE HER READING AGAIN!

PUTTING ASIDE HER READING AND OBLIGATIONS, SECRETARY OF STATE AND SUPER FREAK CONDI RICE TOLD THE NEW YORK POST THAT BILL CLINTON, THE LAST ELECTED PRESIDENT AS HISTORY BOOKS WILL SHOW, DID NOTHING TO FIGHT TERRORISM.

WHEN CONTACTED BY THESE REPORTERS IN HER OFFICE TODAY, CONDI WAS SPINNING THE GLOBE ATTEMPTING TO FIGURE OUT WHICH COUNTRY TO ATTACK NEXT.

"YES, I DO BELIEVE THAT," SAID RICE WHO DISPLAYED A CATALOGUE PAGE TO THESE REPORTERS ASKING "WHAT DO YOU THINK OF ASTROGLIDE?"

ADMITTING WE WEREN'T AWARE OF IT, ELICTING CHORTLES FROM CONDI RICE, ONE OF US POINTED TO A PILE OF DOCUMENTS ON HER DESK.

SECRETARY RICE NOTED SHE WAS BUSY AS SHE GRABBED HER CREDIT CARD AND BEGAN DIALING BUT TOLD US WE COULD LOOK THROUGH THE DOCUMENTS, "JUST LET ME KNOW IF THERE'S ANYTHING INTERESTING IN THERE, OKAY?"

CONDI RICE BEGAN SPEAKING TO THE PERSON ON THE OTHER END OF THE PHONE, "YES, I AM INTERESTED IN THE BLOW UP DOLLS ADVERTISED ON PAGE 32. TELL ME, ARE THEY DURABLE?"

AS THESE REPORTERS WENT THROUGH THE PILE, FROM BOTTOM TO TOP, CONDI RICE EXPLAINED THE SORT OF USES SHE WOULD PUT A BLOW UP DOLL THROUGH.

"WELL I THINK HALIBURTON COULD MAKE A DURABLE ONE!" CONDI YELLED INTO THE PHONE BEFORE SLAMMING IT DOWN.

SMILING, SHE TURNED TO US AND INQUIRED IF WE HAD FOUND ANYTHING. THESE REPORTERS HANDED HER A PDB.

SMILING, CONDI RICE CRUMPLED THE BRIEF, TOSSED IN THE TRASH CAN AND AGAIN EXPLAINED THAT THE BULLY BOY AND HIS ADMINISTRATION HAD DONE EVERYTHING IN THE POWER TO PREVENT 9-11.

"I SHOULD KNOW," CONDI SAID SHOWING THESE REPORTERS OUT OF HER OFFICE, "I WAS THE NATIONAL SECURITY ADVISOR BACK THEN."


Recommended: "Iraq snapshot"
"And the war drags on"
"NYT: Tavernise Returns to the Green Zone Determined to Out-Dexy Dexter Filkins"
"NYT: 'Agencies Say Iraq War Worsens Terrorism Threat' (Mark Mazzetti)"
"NYT: 'Study of Iraq War and Terror Stirs Strong Political Response' (Philip Shenon & Mark Mazzetti)"
"2700 American troops dead since the start of the illegal invasion"
"Who the hell is Alastair Paulin and how did he get so stupid?"
"War comes to class"
"Iraq"
"mondays"
"counterf**k and not in the good way"
"E-mails"
"Visuals, music and Iraq"
"Music"
"That's just the way it is"
"Ruth's Report"
"Editorial: Darrell Anderson Needs You"
"A Note to Our Readers"
"TV: Heroic Would Be Pasdar in a Loin Cloth
Talk"
"Dick & Bully Boy hiding behind others as usual"
"Bully Boy cloud"
"The Tears"
"MyTV's Fascist House"
"Shades Include Green (Party)"
"GreenStone Media"
"About the Times Select . . ."
"Nye-Nye Takes a Fall"
Posted by cedricsbigmix at 6:42 PM No comments: 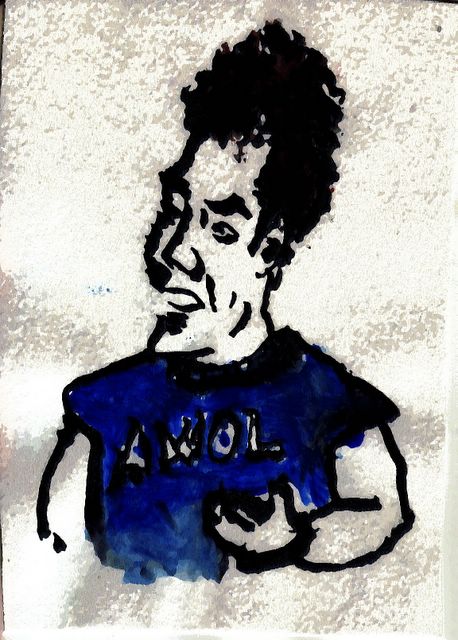 Darrell Anderson. Here's the back story. In January 2003, Darrel Anderson joined the Army. He was sent to Iraq and injured by a roadside bomb. Awarded the Purple Heart, when facing a second deployment to Iraq, Anderson decided to self-check out (January 2005). Like Jeremy Hinzman, Brandon Hughey, Patrick Hart, Kyle Snyder and an estimated 220-plus others, Anderson went to Canada.
In Canada, he applied for refugee status -- a status regularly granted during the Vietnam era but one Canada has thus far refused to grant to any war resister. Recently, Anderson's attorney apparently missed a deadline for the paper work on that issue.
However, Anderson met Gail Greer when she was working on a film about war resisters and married Greer who is a Canadian citizen. The marriage should have resulted in granting him legal resident status. He is currently waiting on that announcement from the Canadian government.
His mother, Anita Anderson, has filled the press in on this month's developments -- this month is when Darrell Anderson told his mother that he was planning on returning to the United States. According to his mother's statements near the start of the month, Darrell was going to return to the United States if the Canadian government did not offer him status. Anderson himself spoke to Jim Warren of The Lexington Herald-Leader for an article published yesterday and it seems the return is no longer in doubt.
The current plans are to cross the border back into the United States, hold a press conference and then return to Fort Knox. He told Warren, "I decided that I've got to go back and get this over with once and for all, instead of living in limbo up here forever."
During the Vietnam era, activists advocated for an amensty for those who dodged the draft and those who decided to check themselves out. With the end of the war, the fall of Richard Nixon with the Watergate exposures, and a new president named Jimmy Carter, it was thought that such a policy was possible. That did not happen. Carter granted amnesty to those who dodged the draft. Those who self-checked out were to be handled on a case by case basis. That was the best that government was willing to do as that illegal war came to a close.
It is highly unlikely that anything's changed in today's political climate. (The amnesty decision was a political decision.) Those who go to Canada know this. The War Resisters Support Campaign provides them with resources, support and information. (And is a worthy charity to donate to.) It is a difficult decision and coming back to the country for any reason (including the funeral of a parent) means risking arrest.
For Anderson, with no work permit due to his status, Canada meant struggle including living with his Post-Traumatic Syndrome from his experiences in Iraq. Loud noises still startle him after the roadside bomb, sleep usually means nightmares of reliving the experience. For those reasons and others, he made the decision to return to the United States and, in his words to Jim Warren, "I decided that I've got to go back and get this over with once and for all, instead of living in limbo up here forever."
What can happen next? He could be dishonorably discharged and that would be the end of it. More likely, he will face an Article 32 hearing for desertion and then a court-martial (which could result in jail time). What happens to Darrell Anderson largely depends on us. Are we willing to speak out? Are we willing to show support?
We're sure the usual suspects will show up for their one-off "Baby cried the day the circus came to town" coverage and that's not going to be good enough. That's not going to do anything. Well, it will let the usual suspects kid themselves that they "covered" the story. It's not a one-day story.
However the media decides to treat it, we have to be willing to keep this issue alive. Ehren Watada is a success story in terms of attention. It seems, however, as though Kevin Benderman (currently serving a sentence) has been forgotten.
Darrell Anderson remains opposed to the illegal war. He is a war resister. Anita Anderson intends to be outside Fort Knox and maybe some can be their physically, maybe some can be their in spirit. But how much we work to keep this issue alive will impact the outcome. As Patti Smith sang and wrote "People Have The Power." But they have to use it.
More information on Darrell Anderson (and other war resisters) can be found at Courage to Resist.