WITH "DIRTY DEPENDS" MONTH OVER, REPUBLICANS SCRAMBLE TO FIND SOMETHING, ANYTHING, TO GET THEM SOME TRACTION AS THE NOVEMBER ELECTION LOOMS.

SHOULD THEY STAND BY THE BULLY BOY OR DISTANCE THEMSELVES?

NUMBER FOR SEPTEMBER JOBS ARE OUT AND IT'S CALLED "THE WEAKEST PAYROLL GROWTH IN A YEAR, IN A FURTHER SIGN OF COOLING ECONOMIC GROWTH, THE LABOR DEPARTMENT SAYS."


THIS AS BULLY BOY BULLIES-UP, DEMONSTRATES THE DANGERS OF AN UNCHECKED BULLY BOY, AND TELLS CONGRESS HE CAN "EDIT THE HOMELAND SECURITY DEPARTMENT'S REPORTS ABOUT WHETHER IT OBEYS PRIVACY RULES WHILE HANDLING BACKGROUND CHECKS, ID CARDS AND WATCHLISTS."

IN NORTH CAROLINA, A CHEMICAL PLANT HAS CAUGHT FIRE AND 17,000 RESIDENTS OF RALEIGH HAVE BEEN EVACUATED. AS USUAL NO COMMENT OR ACTION FROM THE FEDERAL AGENCY THAT IS SUPPOSED TO REGULATE THE INDUSTRY -- SHADES OF THE E-COLI OUTBREAK IN SPINACH.

KARL ROVE'S "KEY AIDE" AND BULLY BOY'S "SPECIAL ASSISTANT" (SHE HELPED JIGGLE HIS LIPS SO HE COULD READ) SUSAN RALSTON HAS RESIGNED. RALSTON PREVIOUSLY SERVED AS THE ADMINISTRATIVE ASSISTANT TO JACK ABRAMOFF THE NOW "DISGRACED LOBBYIST" WHO HAS PLED GUILTY TO BREAKING THE LAW.

JOHN WARNER, REPUBLICAN SENATOR, IS TELLING THE PRESS IRAQI LEADERS HAVE "TWO OR THREE MONTHS" TO GET IT TOGETHER OR THEN THE UNITED STATES NEEDS TO THINK ABOUT "A CHANGE OF COURSE . . . AND I WOULDN'T TAKE OFF THE TABLE ANY OPTION AT THIS TIME."

SO, CONSISTENT WITH THEIR USUAL BEHAVIOR, NO ONE IS TELLING HIM HOW BAD THINGS ARE.

SAID SECRETARY OF DEFENSE DONALD RUMSFELD, "HE'S GOT A PLAY DATE SATURDAY AND IS REALLY EXCITED ABOUT HIS BRAND NEW PAIR OF 'BIG BOY' SHORTS SO NO ONE WANTS TO UPSET HIM."

THE WAR DRAGS ON! 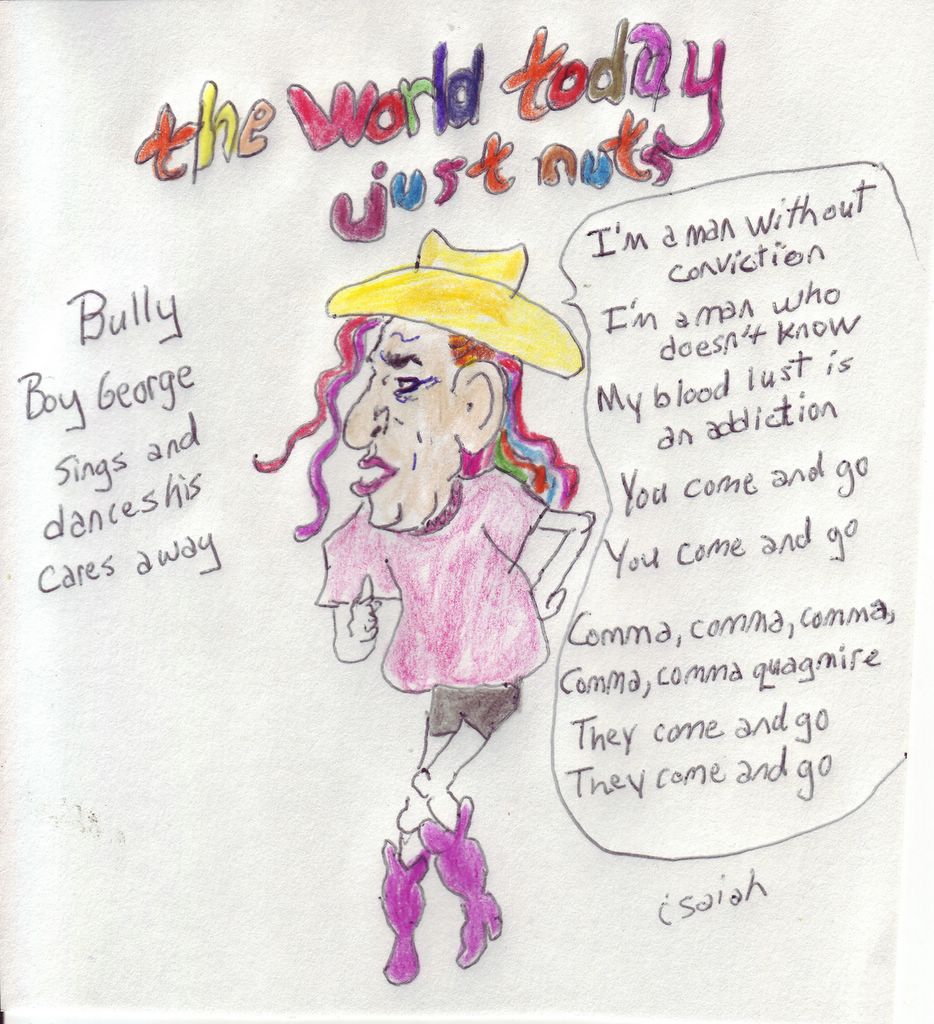 For a complete schedule, click here (PDF) and for more information on war resisters, visit Courage to Resist.
In news of cowardice/caving, Suzanne de Passe rose from upper-middle class African-American to become one of the most powerful women in Hollywood. Early on she realized the importance of image which was among the reasons she traveled by limo even before she "made it" (the other reason -- cab drivers wouldn't stop for African-Americans at night in the sixties). Becoming Berry Gordy's girl-Friday quickly resulted into a powerful position, overseeing Diana Ross & the Supremes and grooming the Jackson Five. Throughout her tenure, she continued to rise (Academy Award nomination for co-writing the screenplay to Lady Sings the Blues, etc.) at Motown -- until Motown founder Berry Gordy sold her the company's TV and features division which she renamed de Passe Entertainment. The accomplishments and accolades continue to mount (Lonesome Dove, et al). Now Jeff Bercovici (Radar) reports that the power player takes a dive when Paul Mooney's comedy routine offends Bully Boy loyalists. The comedy routine was being taped to air on Showtime at the Apollo which de Passe Entertainment produces. The routine included jokes of Gin and Tonic (a staple of any Mooney routine, the Bully Boy's alleged heavy drinking daughters) and Mooney tells Bercovici "They wanted me out of there, the Republicans, the Time Warner people, They said I was Bush bashing, and it was hatred. I felt like I was in Iran or Cuba or somewhere." Since Showtime at the Apollo is largely geared to an audience where Bully Boy has never, over six years, managed to reach even 20% in approval ratings, the act might seem a natural for the program; however, Mooney states that power player de Passe stopped his act in the middle of taping and blamed it on "unnamed officials from Time Warner" which appears to include Richard Parsons, Time Warner chair and on the Apollo Theater Foundation's board of directors. Power player? Or the woman still best remembered for running around with a steno pad and asking (repeatedly), "What did Miss Ross want?" Mooney's routine was nothing surprising or out of charcter to anyone who knows his standup but when a power player plays lackey, censorship can occur.

FROM THE MLI! WIRE:

What in the world is going on in San Francisco? Elaine, Rebecca, Fly Boy, Ma, my sister and I went to our World Can't Wait rally which went great. In San Francisco, they've been buzzed by military jets repeatedly. The electricity has been turned off. I'm on the phone with Jess and at first I thought they had the sound back but no. They've got sound from the power system they've brought in. The rally ("permitted" Jess says) had the power cut off. I was planning to just post the snapshot today but I'm on the phone with Jess getting a report from San Francisco (Jim, Dona, Ty, Jess, Ava and C.I.) Buzzed with fly overs by military jets???? In the United States?????This is insane. Hold on. Jess is asking me to hear something and I can't hear it. He'll tell me what it is when it's over (someone's speaking and I can't hear them). Okay, he's telling me a woman just announced that the sound permit is pulled until 7:00 pm. If you're out there in the Bay Area get out there to Justin Herman Plaza . Jess says this is being broadcast on KPFA's Flashpoints (which I can't get to play right now, maybe too many listening) and that you can hear an archived broadcast if you miss the live broadcast going on right now.

Recommended: "Iraq snapshot"
"NYT: The war is lost but Gordie's hot for 'doggie style'"
"WP: "Attacks in Baghdad Kill 13 U.S. Soldiers in 3 Days" (Paley)"
"Blue Angels buzzing rally and power cut (San Francisco)"
"Under Cheney, democracy's done"
"Guns and Butter (Ruth)"
"Cheney, Iraq and Buckingham Gets to be a Boy after big bad Christine McVie leaves the group"
"if i were pbs, i'd ask, 'who are you to criticize?'"
"Why can't Johnny answer questions? (humor)"
"THIS JUST IN! CAN JOHN ASHCROFT ANSWER THE QUESTION, PLEASE!"
Posted by cedricsbigmix at 6:26 PM No comments:

FORMER ATTORNEY GENERAL J-ASS IS TRYING TO MAKE A COMEBACK AND DOING THE GLAD HANDING TO PROMOTE HIS NEW BOOK.

THE MARY MATLIN OF MORNING HOSTS, MEREDITH VIEIRA DIDN'T "BLOW IT" TUESDAY MORNING, SHE PROVIDED THE COVER EVERYONE KNEW TO EXPECT.

CONFIRMED: JOHN ASHCROFT WAS BRIEFED ABOUT IMPENDING ATTACKS PRIOR TO 9-11 DESPITE HIS LIES THIS WEEK THAT HE WASN'T.

THE STATE DEPARTMENT'S SEAN MCCORMACK HAS CONFIRMED THAT JOHN ASHCROFT WAS BRIEFED ON JULY 17, 2001 ABOUT THE IMPENDING ATTACKS.

JOHN ASHCROFT HAS BEEN CAUGHT LYING.

NOW WILL HE FINALLY BE ASKED OTHER QUESTIONS?

THE QUESTION SHOULD HAVE BEEN ASKED MUCH SOONER; HOWEVER, HE HID AND LIED AND POOH-PAHHED.

NOW THAT IS KNOW THAT ON JULY 17, 2001 HE WAS BRIEFED ABOUT AN IMPENDING TERRORIST THREAT IT IS TIME FOR HIM TO ANSWER FULLY AND UNDER OATH WHY HE SWITCHED TO COMMERCIAL FLIGHTS SEVEN DAYS LATER AND WHY AMERICAN CITIZENS WERE NOT GIVEN THE SAME HEADS UP THAT HE WAS GIVEN.

AND MAYBE THE PRESS CAN ALSO ASK HIM WHY HE TOLD RIGHT WING BLOGGERS THAT "IT'S AN ACT OF MERCY" THAT WE IMPRISON PEOPLE AND NOT KILL THEM?

SECRETARY OF STATE CONDI RICE CONTACTED THESE REPORTERS TODAY TO SHARE A FEW GIGGLES OVER THE FACT THAT, DESPITE HER ORIGINAL DENIAL OF MEETING WITH GEORGE TENENT ON JULY 10, 2001, "TURNS OUT I DID!"

FINALLY, SHE HAD TO STOP TO TAKE A BREATH.

"WELL YOU WERE IN MY OFFICE, YOU BOTH KNOW HOW BUSY I AM."

WHEN ASKED IF SHE'D GOTTEN ANY NEW CATALOGUES, SECRETARY RICE BEGAN LISTING THEM.

THEN SHE GOT TO THE POINT OF HER CALL.

"BULLY BOY SAYS I'M NOT BEING FIRED," SHE EXPLAINED, "BUT WITCHYPOO LAURA HAS HATED MY ASS FOR YEARS. SO I'M NOT TAKING ANY CHANCES. I JUST SIGNED A BOOK DEAL WITH HARPER COLLINS!"

SECRETARY RICE THEN TOLD US THE TITLE OF HER PLANNED OPUS: YOU KNOW WHAT? I SHOULD'VE GUESSED.

YES, AND SHE SHOULD HAVE KNOWN.

The month with the most known number of American wounded soldiers was April 2004 which had a total of 1213. Among those wounded in April 2004 was war resister Darrell Anderson who has turned himself in today at Fort Knox after self-checking out of the military in January 2005 when Anderson drove with his parents to Canada, through a snowstorm.


There, Anderson attempted to seek refugee status (which Canada has refused to grant any war resister thus far), worked odd jobs, met Gail Greer (who was working on a film about war resisters), dated her for a year, and then in February of 2006, Anderson and Greer married. This should have increased his chances for Anderson to remain in Canada (Greer is a Canadian citizen). A missed filing date by his attorney led to the refugee status claim going out the window.

Anderson was already floating the possibility of returning to the United States early this summer. Confirming this to Jim Warren (Lexington Herald-Leader), Anita Anderson (Darrell Anderson's mother) stated that she hoped he would remaing in Canada "because he's probably going to get sponsorship in Canada now that he is married to a Canadian girl. But he's constantly stressed out and worried, and he feels like he can't live out the rest of his life this way."

That feeling, the lack of medical help available to him as an immigrant (Anderson suffers from PST due to the roadside bombing), the lack of income (Anderson had no work-permit) and a desire to draw attention to the realities of the illegal war, led to Anderson deciding to return to the United States. Before turning himself in today, Anderson spoke with reporters. Brett Barrouquere (AP) reports that Darell Anderson stated, "I feel that by resisting I made up for the things I did in Iraq. I feel I made up for the sins committed in this war."

BUT I'M NOT AN INTERN!

IN A BULLY BOY PRESS & CEDRIC'S BIX MIX'S EXCLUSIVE, WE PRESENT MARK FOLEY'S PLAN IN HIS OWN WORDS VIA AN EXCLUSIVE I.M. INTERVIEW.


Recommended: "">Iraq Snapshot"
"And the war drags on"
"26 Iraqis kidnapped, Darrell Anderson returns to the US . . ."
"Other Items"
"Darrll Anderson returns to the United States"
"Isaiah's The World Today Just Nuts 'Bully Boy George'"
"democracy. for the third estate sunday review."
"why look, it's bob woodward. again, for the third..."
"condi rice has a finger for you. this is for the ..."
"tiny timmy, kooky cokie's spiritual match, offers ..."
"with wisdom only many years of senility can provid..."
"darrell anderson scheduled to return to the u.s. today"
"Darrell Anderson, Iraq, Jim McGreevey"
"Darrell Anderson, Katie Couric"
"Islam and the Dope (Thomas Friedman)"
"Iraq and students (C.I.)"
"Baghdad Under House Arrest"
"Editorial: Darrell Anderson Needs You"
A Note to Our Readers
Editorial: The importance of supporting the war resistance
TV: White Man Talking (and talking and talking . . .)
The lost chapter to State of Denial
Somebody tip Gramps' rocker already
They trashed paradise, put in a torture czar
Baghdad Placed Under House Arrest
Condi Flips the Bird at America
Separated At The Turnip Truck
"THIS JUST IN! INTERN SCANDAL!"
"Foley Speaks about the Intern scandal (humor)"
Posted by cedricsbigmix at 5:06 PM No comments: