IT APPEARS SHE DID.

HER EXCUSE FOR HER E-MAILS SCANDALS NOW?

THE COLIN POWELL MADE HER DO IT!!!!

CRANKY IS FAR TOO FAT TO BE GERALDINE JONES.

To defend Hillary, a new push has emerged: "Rape is okay!!!!"

Writer Liza Featherston (author of FALSE CHOICES: THE FAUX FEMINISM OF HILLARY RODHAM CLINTON) notes this disgusting and disappointing trend in a series of Tweets and reTweets:

Liza Featherstone ‏@lfeatherz  Aug 15
Sometimes I think ppl in One PIerrepont Plaza must read these media apologetics, snicker: CAN YOU BELIEVE WE ARE NOT EVEN PAYING THESE PPL
1 retweet10 likes

Liza Featherstone ‏@lfeatherz  Aug 15
I expected Woke Tim Kaine. Nothing HRC does is shocking, it's the creative intellectual gymnastics of her supporters that continue to amaze.
7 retweets34 likes

Liza Featherstone ‏@lfeatherz  Aug 15
I did not expect that to get behind idea of defeating Trump, we'd be asked to believe in crazy Russian conspiracies, rape apologetics.
11 retweets31 likes

Jonathan Cohn ‏@JonathanCohn  Aug 15
@lfeatherz These people recoil at "lesser evil" frame. Offended by the very idea Clintons could be "evil" and will not stand for it.
4 retweets10 likes

Liza Featherstone ‏@lfeatherz  Aug 15
I expected to often agree with Democrats, once primary was over. Hey, Trump sucks amiright? But still with the most ridiculous commentary!
1 retweet13 likes

Will Menaker ‏@willmenaker  Mar 10
What's the single most reactionary position we can get Hillary supporters to defend before the primaries end?
271 retweets741 likes

Liza Featherstone ‏@lfeatherz  Aug 15
Liza Featherstone Retweeted Will Menaker
I predict...male prerogative to rape and still be a feminist. Throwing poor women off welfare. War. OH WAIT...
Liza Featherstone added,
Will Menaker @willmenaker
What's the single most reactionary position we can get Hillary supporters to defend before the primaries end?
13 retweets39 likes

Katie Halper ‏@kthalps  Aug 15Queens, NY
Feminism is a big tent. But I didn't know it had seating section for rapists. @Wonkette #DeleteYourFeministAccount

Liza Featherstone ‏@lfeatherz  Aug 15
If you're writing think pieces saying that it's OK if Bill Clinton is a rapist pls ask yourself where you went wrong in your life.
66 retweets115 likes


Liza's got the Tweet of the week with the last one:  "If you're writing think pieces saying that it's OK if Bill Clinton is a rapist pls ask yourself where you went wrong in your life."


Posted by cedricsbigmix at 8:33 PM No comments:


CRANKY CLINTON'S ASS PUPPET JOSHUA HOLLAND DEFENDS HER AT THE NATION BECAUSE THAT'S WHAT ASS PUPPETS DO -- THEY WHINE AND THEY LIE AND THEY WASTE OUR TIME.

HE WAS TALKING OUT HIS ASS YET AGAIN.


The press treats Iraq as static because it benefits their political heroes.

It doesn't benefit the truth.

But that's how empire works.

Do you really think, at the height of the British Empire, reporters were telling the truth about how this was being done to enrich a few?

Reporters are whores, they just usually fail to satisfy the customers -- so they're bad whores.

And they so pollute the system that when a few real reporters try to cover a story there's no way not to make mistakes.


It's a hard story to tell.


But Jeff Gerth (PROPUBLICA) and Joby Warrick (WASHINGTON POST) team up in an attempt at it:

A week before the last U.S. soldiers left his country in December 2011, Iraqi Prime Minister Nouri al-Maliki traveled to Washington to meet the team that would help shape Iraq’s future once the troops and tanks were gone.
Over dinner at the Blair House, guest quarters for elite White House visitors since the 1940s, the dour Iraqi sipped tea while Secretary of State Hillary Rodham Clinton spoke of how her department’s civilian experts could help Iraqis avoid a return to terrorism and sectarian bloodshed.

Iraq would see a “robust civilian presence,” Clinton told reporters afterward, summing up the Obama administration’s pledges to Maliki. “We are working to achieve that,” she said.

Less than three years later, the relatively calm Iraq that Maliki had led in 2011 was gone. The country’s government was in crisis, its U.S.-trained army humiliated, and a third of its territory overrun by fighters from the Islamic State. Meanwhile, State Department programs aimed at helping Iraqis prevent such an outcome had been slashed or curtailed, and some had never materialized at all.


It's a strong article.

It's also an incomplete article.

It paints Hillary correctly as wanting a US presence in Iraq.

Where it fails is rushing to the White House slashing the program -- and the why of it.

As 2012, progresses, the White House walks further and further away from Iraq.

In October 2011, the State Dept takes over the US mission in Iraq.

Where is that in the article?

And where in the article does it note the 2011 performance of the State Dept to Congress?

Congress is over the money.

And Congress wanted to know what the US mission in Iraq was.

Have we all forgotten that?

We can offer dozens of hearings that we covered in real time but let's go to the December 1, 2011 snapshot which covered the November 30th hearing of the  House Foreign Affairs Subcommittee on the Middle East ans South Asia.


"Can anyone stand her?"
"THIS JUST IN! SHE FALLS AGAIN!"

Posted by cedricsbigmix at 9:26 PM No comments:

Can anyone stand her?

A REUTERS POLL OUT FRIDAY FOUND CRANKY AT 41% AND DONALD TRUMP AT 36%.

REACHED FOR COMMENT, CRANKY HOLLERED, "GRRRROWWWWWLLLLL! I WILL DESTROY YOU ALL!"


Here's a reality about the corporate Democratic Party.

They had two choices after the 2000 election.

They felt that voters for Ralph Nader cut into their votes.

So they could (a) attempt to shame Nader voters or (b) move to the damn left.

They didn't move to the left.

They're corporate whores -- and that's true of the GOP as well. 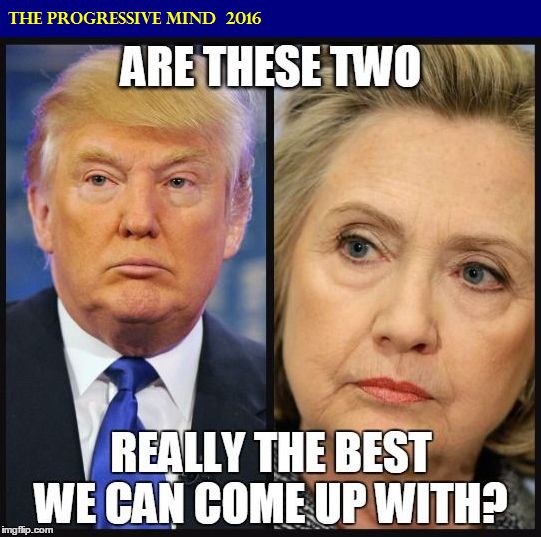 
And it's really sad to see Cher applaud them for that.

Come Back To Reality, Cherilyn, Cherilyn.

She used to have a lot more sense.

No one owns your vote except you.

In the United States, you choose how to use your vote.

If you're happy about your vote, whomever it's for, great.

That's what we should aspire to.

But your vote has to be earned.

If no one earns it, you shouldn't give it away.

Hillary took her vote seriously . . . when she voted for the Iraq War.

RECOMMENDED: "Iraq snapshot"
"Miller Statement on President Obama’s Speech to DA..."
"Senators to Secretary Kerry: Taxpayers Deserve Tru..."
"Iraq snapshot"
"Iraq snapshot"
"Iraq snapshot"
"Iraq snapshot"
"More US troops and weapons headed to Iraq"
"Hejira"
"Jill Stein accepts the nomination"
"Princess Clinton takes a fall"
"George Clooney's so full of it"
"The people behind Hillary"
"A voting guide of sorts"
"CRIMINAL MINDS?"
"The Clinton's illegal and pornographic wealth"
"James Petras explains this election"
"That wasted money"
"Afghan Whigs"
"hadley freeman is an idiot"
"Hillary's latest nonsense"
"State Department reveals investigative process"
"THIS JUST IN! THEY INVESTIGATE THEMSELVES!"
"A gay character in the ARROW universe?"
"She did what she accused Chelsea Manning of"
"jonah hill's mistake"
"Donald Trump is right, it is rigged"
"Vote Jill!"
"Another reason to vote for Jill Stein"
"When she 'explains' her lies she just gets in deeper"
"Crooks like Hayden"
"Best little known Stevie Nicks' song"
"More on Hillary's pay-for-play"


Posted by cedricsbigmix at 11:10 PM No comments: