IT'S BEEN A DIFFICULT TIME FOR CRANKY CLINTON.  ALL OF HER NUTTY CONSPIRACY THEORIES FAIL REPEATEDLY AND SHE'S LEFT WITH THE FACT THAT SHE WAS A LOUSY CANDIDATE AND SHE IS THE REASON THAT DONALD TRUMP IS IN THE WHITE HOUSE.

THEN LAST WEEK, SHE AND BILL ARE WATCHING THE DEMOCRATIC PARTY DEBATE.

AND BILL TELLS HER?

"THAT TULSI GABBARD IS A GOOD LOOKING WOMAN."

SHE HITS THE ROOF AND IMMEDIATELY BEGINS TELLING THE PRESS THAT TULSI IS A RUSSIAN STOOGE. 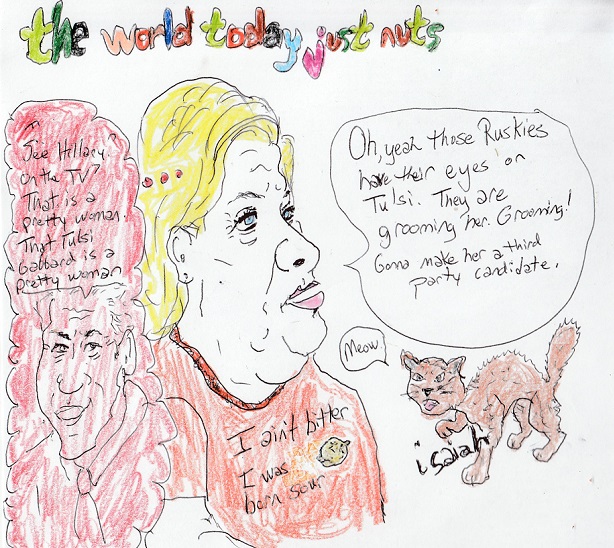 SHE HADN'T BEEN THIS ENRAGED SINCE SHE WAS THE FIRST LADY AND BILL LIVED WITH HER IN THE WHITE HOUSE.  IT WAS A THURSDAY NIGHT AND THEY WERE IN BED.  SHE WAS FLIPPING CHANNELS AND CAME ACROSS AN EXERCISE  INFOMERCIAL STARRING CINDY CRAWFORD.

"DO YOU THINK SHE'S PRETTY?" SHE ASKED BILL.

REACHED FOR COMMENT, AGING HAGTRESS ALYSSA MILANO TOLD THESE REPORTERS, "WE'VE ALL BEEN THERE!"

In the US, the race for the Democratic Party's presidential nomination continues.  Would Michael Bloomberg enter that race?  The overly confident former mayor of New York City denied his plans to run recently.  Carlos Greer (NEW YORK POST) reports:

Former Mayor Michael R. Bloomberg played it cool when people urged him to run for president at the Hudson River Park annual gala, where he was honored Thursday night.
“He brushed off whispers in the room of a presidential run and gave his signature crooked smile when one table held up signs that read ‘Bloomberg 2020,’ ” a guest told Page Six. Bloomberg sat with fellow honoree Lucy Liu and her “Elementary” co-star Aidan Quinn.

Former New York mayor Michael Bloomberg is at it again – teasing a presidential run. At 77, he won’t even be the oldest in the field, and the billionaire is certainly not short of funding to be able to throw his hat in the ring.
Over the past several weeks, he’s signaled renewed interest in the democratic nomination, telling friends and associates he’s “still looking at” running for president. But he has cautioned he’d only join the race if former vice-president Joe Biden’s faltering centrist campaign takes a decisive hit or pulls out early in primary season, according to a report by CNBC.

Biden’s collapse would likely leave Elizabeth Warren as frontrunner, a liberal candidate with whom he has repeatedly clashed over her anti-corporate policies and fears she will push the party too far to the left and eliminate the chance of a Democratic candidate unseating Donald Trump next year.


I love this, by the way, this press notion that Elizabeth Warren is too left for voters which, as Joe Biden crumbles, is put with the neoliberal claim that Pete, the man who's done nothing but be mayor, is a better candidate.  how so?

Hillary Clinton, in 2016, remember, felt the need to massage anxiety over Bill Clinton being First Spouse by saying he wouldn't be planning state dinners (apparently, had she won, she'd be both the president and the first lady).  It was idiotic and we called it out in real time.  But the 'pragmatic' campaign of Hillary Clinton, insisted that America was wary of a man in the first lady role.

So Hillary had to do that in 2016 -- or felt she had to -- but Pete and his ale spouse are just the ticket four years later?

I'm not saying he couldn't win.  I am saying you are vastly under-estimating American's obvious homophobia (not latent) when you think, if gifted with the nomination, Pete would just sail to victory.

Pete has a chance at the presidency, all the candidates do.  But to repeatedly stress and sell him as the 'safe' choice is to ignore reality.

Again, in 2016, Hillary's campaign -- based on polling -- felt the need to stress that Bill would not be planning dinners.  That was four years ago.

Add male anxiety to homophobia and you've got some rough waters to navigate.  Can they be navigated?  Yes.  But don't pretend it would be easy.

There's nothing about Pete that makes him an easy choice.  He has a huge lack of experience.  Others won't be as timid or stupid as Beto O'Rourke who backed down when Pete tried to challenge him.  Others will point out, "You were a glorified secretary in Afghanistan.  You are not  a combat veteran.  The only medal you have is the medal everyone gets.  Stop pretending you have some vast miliary experience."  And being the mayor presiding over what?  Racial killings by the police?  Oh, that's a wonderful recommendation.

"Alyssa Loves Donald"
"THIS JUST IN! ALYSSA AND DONALD SITTING IN A TREE!"

Posted by cedricsbigmix at 6:14 PM No comments: