CHELSEA CLINTON, FAMOUS FOR BEING IF NOT FOR HAVING DONE, TOOK SPOILED RICH GIRL TO NEW HEIGHTS AS SHE ATTACKED SENATOR BERNIE SANDERS.

OF COURSE, SHE DID NOT A THING SHE WAS TALKING ABOUT.

IN FACT, AS BLONDE MOMENTS GO, IT'S RIGHT UP THERE WITH JESSICA SIMPSON PONDERING WHETHER STARKIST TUNA WAS CHICKEN OR TUNA.


"ISIS has gained affiliates faster than al Qaeda ever did," Mike Morell declared today.  "From nothing a year ago, there are militant groups in nearly 20 countries that has sworn allegiance to ISIS."


The former CIA deputy director was speaking before the House Armed Services Committee.

The Committee Chair is US House Rep Mac Thornberry and US House Rep Loretta Sanchez was the Acting Ranking Member for the hearing.  Along with Morell, also appearing before the Committee was the former Under Secretary of Defense Michael Vickers and former US Ambassador to Syria Robert Ford.


The focus of the hearing?

Acting Ranking Member Loretta Sanchez; The influence of ISIL is spreading.  I think we have to -- we have to get our heads around that and we also see other extremist groups that are beginning to align or coordinate with ISIL from North Africa and that is a problem.  So in general, I would say that the international community, the US, Democrats, Republicans, we're trying to really grapple with how we define, how we handle, what is the best way in which we defeat this evolving situation of ISIL and aligned groups.

Sanchez repeatedly stressed the need for a strategy to confront the Islamic State -- a clearly defined one.

In plain speak: Where's the plan?


Today, the US Defense Dept announced:

Strikes in Iraq
Fighter and bomber aircraft conducted 19 strikes in Iraq, coordinated with and in support of Iraq’s government:

-- Near Habbaniyah, one strike destroyed an ISIL bridge and denied ISIL access to terrain.

-- Near Huwayjah, one strike struck an ISIL tactical unit and destroyed an ISIL vehicle.

-- Near Sultan Abdallah, one strike struck an ISIL tactical unit and destroyed an ISIL fighting position.

-- Near Tal Afar, one strike destroyed an ISIL-used bridge.


Task force officials define a strike as one or more kinetic events that occur in roughly the same geographic location to produce a single, sometimes cumulative, effect. Therefore, officials explained, a single aircraft delivering a single weapon against a lone ISIL vehicle is one strike, but so is multiple aircraft delivering dozens of weapons against buildings, vehicles and weapon systems in a compound, for example, having the cumulative effect of making those targets harder or impossible for ISIL to use. Accordingly, officials said, they do not report the number or type of aircraft employed in a strike, the number of munitions dropped in each strike, or the number of individual munition impact points against a target.

Since August 2014, US President Barack Obama's answer has been?

To drop bombs on Iraq.

Two months prior, he had insisted publicly that the only answer to Iraq's crises was a political solution.

But he quickly shoved that aside.

His focus has been on bombing and more bombing.

"About that jobs report"
"Shades of Blue the pilot"
"MoveOn endorses"
"Why hasn't Rahm stepped down yet?"
"David Bowie"
"Bungler Obama"
"who the razzies forgot"
"You are watching Mad TV"
"How did we get here?"
"The speculation about Aaron"
"THIS JUST IN! NO PERP WALK CAN HOLD HER!"
"Hillary boasts"

CRANKY CLINTON IS SAID TO BE FACING LEGAL ISSUES AND POSSIBLE CRIMINAL CHARGES.

REACHED FOR COMMENT, CRANKY SCOFFED AT THE POSSIBILITY INSISTING, "NO PEN IN THE WORLD COULD HOLD ME.  AND NO ONE'S EVER MADE CHARGES AGAINST ME STICK.  SLICK WILLIE?  CALL ME TEFLON HILLY!  NOTHING STICKS! NOT EVEN ON A BLUE DRESS!  YOU KNOW M.C. HAMMER?  HE WROTE 'YOU CAN'T TOUCH THIS' ABOUT ME."


Iraq was slammed with violence today.  REUTERS counts a minimum of 51 dead in Baghdad and the eastern town of Muqdadiya. MIDDLE EAST EYE explains, "Three bloody attacks struck Iraq on Monday evening, with gunmen raiding a Baghdad shopping mall, a bomb rocking a busy market in the capital and further bombings killing at least 20 in a town north of Baghdad."

Of the violence, Judy Woodruff (THE NEWSHOUR, PBS) notes, "It began with a car bomb and suicide blast at the Jawhara Mall. That touched off a 90-minute gun battle before security forces gained control. To the north, another suicide attack killed two dozen people. Ten more were killed in other bombings." Muqdadiya is a town in Diyala Province.  Of the violence there, Mu Xuequan (XINHUA) reports, "Up to 23 people were killed and 44 others wounded on Monday in two coordinated bomb attacks at a coffee shop in a town in Iraq's eastern province of Diyala, a provincial security source told Xinhua."

DEUTSCHE WELLE observes, "The bombings and attacks on Monday left the biggest death toll in three months. Without naming IS, Interior Ministry spokesman Brigadier General Saad Maan blamed 'this terrorist group after they suffered heavy losses by the security forces'."  In light of today's attacks, ALL IRAQ NEWS notes, Ammar al-Hakim, leader of the Islamic Supreme Council of Iraq, has called on the Baghdad Operations Command to re-examine their security plans.


The United States condemns the barbaric acts of terrorism today in Iraq, including a suicide bombing and hostage-taking at a mall in Baghdad for which ISIL has claimed responsibility and two separate suicide attacks in Muqdadiyah. We express our deep condolences to the survivors and to the families of the victims.
These attacks once again display the utter disregard ISIL has for the lives of innocent civilians. We stand united with the Iraqi people as they confront the scourge of violent extremism.
The United States remains committed to working with Prime Minister al-Abadi, the Iraqi Security Forces, and our Coalition partners to support Iraqi-led efforts to degrade and destroy ISIL.

On Muqdadiyah, Diyala Province has been placed under curfew.  The unrest includes:


Dropping back to Sunday:


Though many Americans have tuned out since 2009, they need to be paying attention.


And it is graphic.

You don't have the right to look away.

There's no legal justification for it.

Not even in the joke that is the Iraqi legal system.

What happened should result in immediate prosecution.

Those are War Crimes.

The prime minister of Iraq, Haider al-Abadi, should be denouncing the crimes.

Any refusal to do so should result in the US Congress exploring whether or not they should continue their support of Haider's government.

John Kirby didn't even acknowledge them in today's US State Dept press briefing.

You can be sure Sunnis across the Middle East are aware of the silence.


"THIS JUST IN! CRANKY CLINTON PREPARES TO NOT BE LEFT HOLDING THE BAG!"
"Cranky to walk away from Big Dawg"

Posted by cedricsbigmix at 10:49 PM 4 comments:

Cranky to walk away from Big Dawg

IS THE BIG DAWG ABOUT TO FACE A FULL ON BILL COSBY?

THOSE RUMORS HAVE SOME WORRIED.

BUT NOT HIS WIFE CRANKY CLINTON.

IN AN EXCLUSIVE INTERVIEW THIS EVENING -- MUST CREDIT   BULLY BOY PRESS &   CEDRIC'S BIG MIX -- CRANKY INFORMED THESE REPORTERS THAT SHOULD BILL CLINTON BECOME A PROBLEM FOR HER CAMPAIGN, SHE WILL DROP HIM IMMEDIATELY.


NOT ONLY THAT, SHE WILL DENY EVER KNOWING HIM.

HAVING MARRIED HIM IN THE 70S  AND BEEN FIRST LADY WHILE HE WAS PRESIDENT, WE QUESTIONED HOW SHE COULD SUCCESSFULLY CLAIM TO HAVE EVER KNOWN HIM.

CRANKY LAUNCHED INTO ONE OF HER TRADEMARK CHARMING CACKLES BEFORE REPLYING, "BOYS, WHAT LIE HAVEN'T I TOLD SO FAR?  AND I ALWAYS GET BELIEVED."


One definition of "distraction" would be "a thing that prevents someone from giving full attention to something else."  That's the definition we're interested in today.


I guess every day is going to be about declaring and celebrating the liberation of Ramadi -- since it was first claimed on Monday and until the day finally comes that it is liberated.
Point of fact, it's still not liberated.
But every day, the limited amount of time the world press spends on Iraq is taken up by tales of Ramadi's liberation.
And so much more gets ignored.
For example?
IRAQI SPRING MC reports counter-terrorism forces in Diyala shot dead a female civilian in front of civilians and Iraqi troops.
Or how about a new flashpoint developing?
IRAQI SPRING MC notes troops being sent to Basra.  This comes as NATIONAL IRAQI NEWS AGENCY notes MP Abd al-Salam al-Maliki is calling for the declaration of a state of emergency in Basra arguing the situation there is turning into a crisis.
But by all means, let's all waste another day declaring Ramadi liberated (when it's not).


That's how the year ended -- and with no western press coverage of Basra, to be very clear.

Sinan Salaheddin (AP) reports, "Fear has become part of daily life amid a surge of violence in Basra, where rampant crime, kidnappings and extortion have become commonplace. Marauding Shiite militiamen drive around in cars with tinted windows and without plates, while local clans wage bloody feuds."

Basra's struggling and, in part, that's said to be because Iraqi forces are being deployed elsewhere in Iraq.


See the Iraqi forces are like the western press -- they apparently are small in number and can only focus on one thing at a time.

How does Basra fall off the radar?

Or has everyone forgotten this photo op? 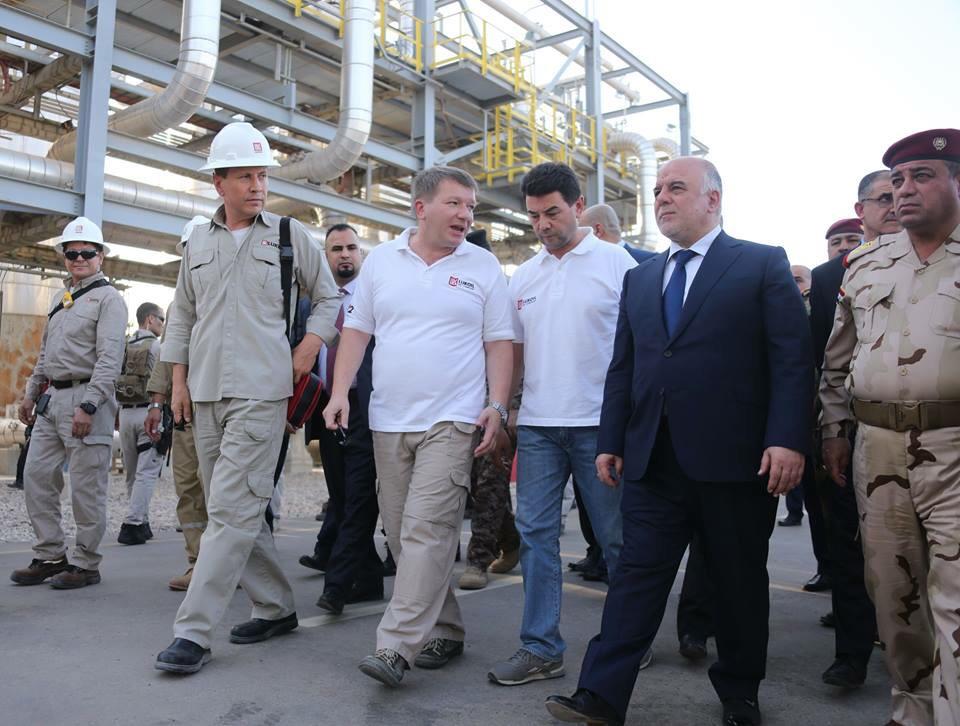 
From the August 22, 2015 snapshot, "Iraq Times reports the reaction to citizens in Basra which was to protest Haider's visit. The activists noted that he traveled all the way to Basra to reassure Big Oil but he did not meet with a single local protester to address the concerns that have had them pouring into the streets for the last weeks.  The report notes that the British and US Ambassadors to Iraq had lobbied Haider to visit Basra to reassure Big Oil.  As Iraq Times also notes, just north of Basra is where a protester -- protesting against Big Oil -- was shot dead by security forces working for yet another foreign oil company in Iraq."

And the protests?  They continue in Basra.  ALSUMARIA reports Friday saw continued protests there against the government's corruption.


Yes, the western press should have been paying attention to Basra last year.

RECOMMENDED: "Iraq snapshot"
"2 arrests"
"Iraq snapshot"
"Idiot of the Week"
"Those do not qualify as old movies"
"Eric investigates Eric"
"Powerball"
"The crooked Hillary"
"heroes reborn finds new life"
"The future of the internet"
"Where are the jobs?"
"For poser Barack and the bitches who worship him"
"How delightful"
"Response to the year in music"
"How do you interview for that?"
"FBI harasses Bob Graham"
"Luke Cage and Winona Ryder"
"Rickie Lee Jones"
"Natalie Wood"
"hillary's never ending e-mail mess"
"Photo of note"
"They are just so damn tawdry"
"Video to stream"
"The story getting little attention"
"Cranky a failure?"
"THIS JUST IN! CRANKY CLINTON DISMISSES CHARGES OF FAILURE!"


Posted by cedricsbigmix at 12:02 AM No comments: