John Stauber‏ @JohnStauber  26m26 minutes ago
John Stauber Retweeted Adam H. Johnson
For anyone younger than 50, welcome to the #NewColdWar era! @TheDemocrats have ignited a #newredscare scam like they had going in 50s, 60s 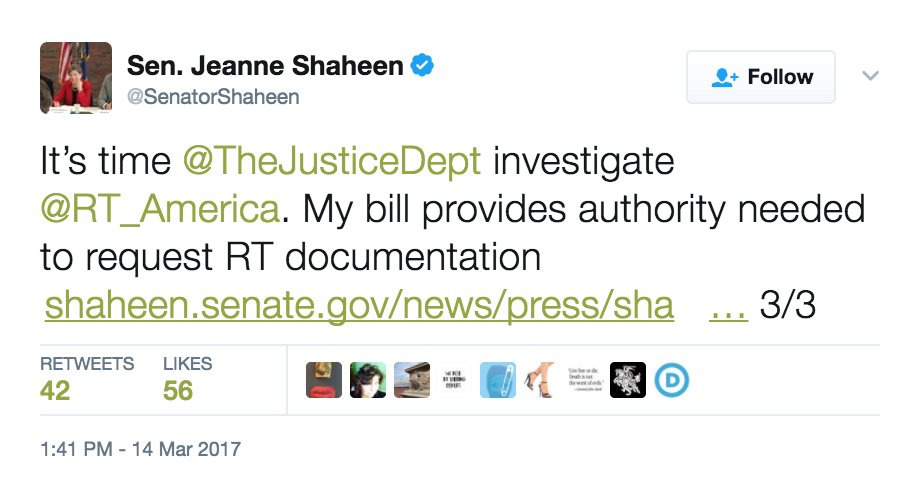 
ARE THE RUSSIANS NOT PEOPLE?

"NO!" SNAPPED JOHN FEFFER.  "THEY ARE HIDEOUS.  THEY'RE DOGS!  THEY'RE WORSE THAN DOGS! THEY'RE FLEAS ON DOGS!  THEY EAT CHILDREN!  THEY ARE EVIL!  I AM JOHN FEFFER AND I KNOW THIS BECAUSE I KNOW EVERYTHING! STICK WITH ME, I WILL LEAD YOU INTO NEOLIBERAL LAND!"

AREN'T YOU GLAD YOU MET THE 'RESISTANCE'?


It would appear that a large number of people who should be speaking out can't because elected persons in the Democratic Party have yet to give them their marching orders.


That's the difference between ethics and partisanship -- you're witnessing it right now.

And the difference between courage and silence?

Look at 'leaders' like John Conyers and Barbara Lee who cower instead of speaking out as the suffering of the Iraqi people is set to hit the 14 year mark in mere days.

Posted by cedricsbigmix at 7:04 PM No comments:

THESE REPORTERS TRACKED DOWN PREET BAHRARA FOR HIS RESPONSE AND DISCOVERED HIM AT THE BODY BALANCE IN HOBOKEN WHERE HE WAS PREPARING TO HIT THE STEAM ROOM.

"SURE THERE ARE PLENTY IN MANHATTAN, BUT WHEN YOU NEED A GOOD RUB-N-TUG, NEW JERSEY ALWAYS HITS THE SPOT," PREET DECLARED PULLING OFF HIS PANTS AND BOXERS EXPOSING A LARGE TATTOO OF CITIBANK ON HIS LEFT FLANK AND "ENRON FOREVER" SCRAWLED JUST ABOVE HIS WELCOME MAT.

DESPITE THESE AND OTHER TATTOOS, PREET DENIES THAT HE WENT EASY ON CORPORATIONS.

"When the heartache is over, you know I won't be missing you," sings Tina Turner.  Amen.

When the Iraq War is over -- surely that day has to come -- there's so much I won't miss.

Chief among them self-deception.

Danny Sjursen has a post that's all over the internet.  Sometimes it includes the lie that the January march against Donald Trump was larger than the protests against the Iraq War.  No.  DC and LA had strong turnout in January.  But the Iraq protests spread out across all of the US -- not just media centers -- and they were huge.

It's typical of 'the resistance' to have spread that lie (not calling Sjursen part of 'the resistance').  They didn't take part in the protests against the Iraq War.  And now they try to build their lies on the foundation of real work.

We'll link to Sjursen's article at THE NATION because at least it ditches the intro that includes that lie about the January protests being greater than the 2003 protests against the Iraq War.

There are facts and there are interpretations of facts.

I think Sjursen's failing in both.

Bully Boy Bush's surge (which we opposed, check the archives) was about (a) increasing the number of US troops in Iraq to address the violence and (b) this providing space for the Iraqi politicians to work on reconciliation.

He judges the first part to be a failure.

I disagree, it did what it was supposed to do.

He's not honest about what that was.

I'm tired of the self-deceptions people tell themselves to feel good.

(I'm also tired of pieces on Iraq that focus on Bush and Trump while ignoring Barack Obama.)


Sjursen talks about "civil war" (we used the term long before the surge) and how Baghdad became a Shi'ite city.

By the time Sjursen was part of the surge, we were already calling it what it was: Ethnic cleansing.

I'm really sorry that he can't deal with the reality of what went down in Iraq.

It was ethnic cleansing.

He can denounce Nouri (while never calling Barack out for giving Nouri a second term when the Iraqi people voted him out in the 2010 election).

He can talk about what Nouri did and the attacks on the Sunnis.

He just can't connect the dots -- we were doing so in real time, a decade later he still wants to self-deceive.


RECOMMENDED: "Anticipation (Carly Simon)"
"The slog continues"
"When privacy ain't private anymore (Sarah Abdallah..."
"My Love (Jess Glynne)"
"Michael Tracey Tweets"
"Not Loving You (Mary J. Blige)"
"California (Joni Mitchell)"
"A question for those who want to impeach Trump (Ma..."
""Hymn To Her" (The Pretenders)"
"Iraq snapshot"
""Cloud On My Tongue" (Tori Amos)"
"Hillary's Shoe Response"
"KONG: SKULL ISLAND"
"The natural outcome"
"Knowing in the Biblical sense"
"THIS JUST IN! MAXINE WATERS REALLY KNOWS DONALD TRUMP!!!"
"Conor Oberst, Carly Simon"
"I agree with my cousin"
"The propaganda"
"glenn's only 1/2 right"
"Debra Messing and the other do nothings"
"Real issues get shoved aside by the nonsense 'resistance'"
"Granddaddy was a Nazi -- but it's okay because it's Putin's fault!!!"
"WikiLeaks"

Posted by cedricsbigmix at 2:48 PM No comments: