BULLY BOY PRESS & CEDRIC'S BIG MIX -- THE KOOL AID TABLE
ADMINISTRATION SOURCES REVEAL THAT THIS MORNING AT THE WHITE HOUSE, JEN PSAKI BRIEFED PRESIDENT JOE BIDEN ON AFGHANISTAN, "MR. PRESIDENT," SHE SAID, "AP IS REPORTING '"TALIBAN PRESS ADVANCES'.''"JEN," THE PRESIDENT RESPONDED, "I DON'T CARE FOR JOURNALISTS EITHER BUT IT'S NOT FAIR TO COMPARE THEM TO TERRORISTS. MEANWHILE, I JUST HEARD JERRY O'CONNELL'S REPLACING SHARON OSBORNE! I THOUGHT SHE'D BE WITH OZZY FOREVER. IF I WERE JERRY, I'D BE A LITTLE WORRIED. I MEAN, OZZY ONCE BIT THE HEAD OFF A BAT. WHO KNOWS WHAT ELSE HE MIGHT BITE OFF."

In Iraq, the people are still reeling from a fire that appears to be caused due to a lack of government oversight and regulation probably due to corruption.  Ruth Sherlock (NPR) notes, ''Flames swept through outbuildings of the al-Hussein Teaching Hospital in the southern city of Nasiryah on Monday that had been set up to isolate those sick with COVID-19. Patients became trapped inside, with rescue teams struggling to reach them in time."  From yesterday's snapshot:

The death toll continues to rise.  It was 66 when I started dictating this snapshot a few minutes ago and it's already increased again.  Rafid Jaboori Tweets:

Death toll in a #COVID19 hospital fire in southern #Iraq rises to 70. In April 100 people were killed in another hospital fire in #Baghdad . Health minister resigned back then but no overhaul of safety rules & precautions seems to have taken place 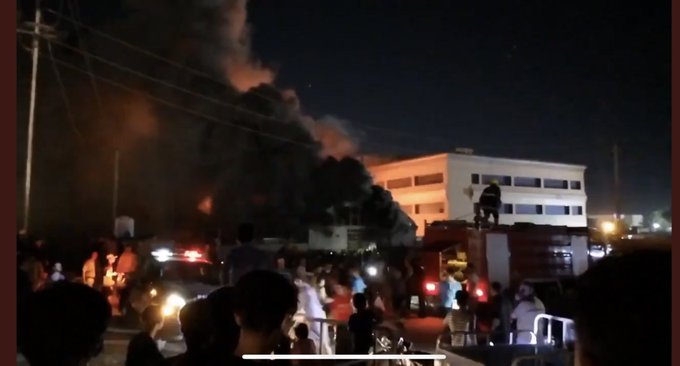 And the death toll has continued to rise since yesterday's snapshot.  Aqeel Najim and Mohammed Tawfeeq (CNN) explain, "The death toll in a fire at a hospital treating coronavirus patients in southeastern Iraq has risen to at least 92, according to health officials."  BBC NEWS adds:

Arrest warrants have been issued against 13 people, local media report.

PM Mustafa al-Kadhimi earlier ordered the arrest of the head of the hospital, and said the fire was "a deep wound in the conscience of all Iraqis".

Stopping for something else.  The Rendon Group.  Remember them?  They lied and sold the Iraq War.  People pay money for their 'help.'  They're a bunch of idiots.  I say that not just because I am and remain opposed to the Iraq War, I say that because they make themselves a laughingstock.  Less than 40 minutes ago, they Tweeted the following:

Rendon #Daily is up https://rendon.com/13jul21-global-overnight-overwatch-report/
w/ news on Cuba's most significant protests in decades continue to provoke responses by powers both domestic and abroad; > 50 people died in a hospital fire in Nasiriya, Iraq; Tigrayan forces seized another major city in Ethiopia & more

13JUL21 Global Overnight Overwatch Report - The Rendon Group
Key Storylines AFRICA:  A spokesman for the Tigrayan forces told AFP that they seized Alamata, the largest town in the southern Tigray region of

By this morning it was already 92 at some outlets (others are saying "over 100") and Rendon is Tweeting 50.  50.  It was over 60 when I dictated yesterday morning's Iraq snapshot.  You'd have to be an idiot to pay them -- sorry, Pentagon.

Angry residents in the city of Nasireyah torched two police vehicles and demanded accountability for family members who had died in the fire on Monday at the Al-Hussein teaching hospital. Iraq’s president, Barham Salih, claimed that corruption at the hospital, which was ravaged by flames, had also been a factor.

Failures of Iraq’s bloated and often inefficient public sector have often been highlighted by citizens who claim the state delivers little despite reaping huge revenues from oil production. Scenes of flames and smoke belching from the sanctuary of hospitals – twice in three months – have been a particularly visceral symbol of the government’s shortcomings.

Overnight, firefighters and rescuers — many holding flashlights and using blankets to smother small fires — searched through the ward. As dawn broke, bodies covered with sheets could be seen laid out on the ground outside the hospital. Distraught relatives searched for traces of their loved ones amid charred blankets and belongings.

Ali Khalid, 20, a volunteer who dashed to the scene, said he found the bodies of two young girls locked in embrace.

"How terrified they must have been, they died hugging each other," he said.

"How the U.S is Manufacturing Consent to Coup Cuba"

"The Next Patrick Mahomes"

"How Not to Prevent U.S. Military Suicides"

"Leaders Around The World Stand In Solidarity With ..."

"#RichardMedhurst US Amplifies Protests in Cuba"

"Sam Seder & Cenk Uygur Ignore The Truth About The ..."

"Why we need a Federal Jobs Guarantee"

"Branson Blasts Off. What’s Next for Space?"

"Stella Morris blasts US bid to save Assange persec..."

"Saagar Enjeti: Avenatti Coverup Is Why NOBODY Shou..."

"a critical time in the fight for the Equal Rights ..."

"Nina Turner’s Primary is Truly a Mask Off Moment f..."

"Cenk Uygur Admits that He and Ana LIED when they m..."

"The Problem with Elite Discourse on Racism with Gl..."

"US refuses to drop Assange hunt even after key wit..."

"A look at the Chipko Movement: a milestone in Ecof..."

"Why do women need to be financially literate? | Fe..."

"The state of movie theaters"

"STILLWATER, the film no one ever needed"

"The monsters in THE TOMORROW WORLD"

"Chicken and Sausage Gumbo in the Kitchen"

"Blame the military brass -- they earned the blame ..."

"Jackson Browne still full of himself"

"They hide history so you won't know your own power"

"The JFK Files : The Murder of a President - The Fifth Estate"

"What's behind facial recognition (and projection)?"

"They're cutting their own wrists"

"THIS JUST IN! BIDEN LOVES HOULIHAN! AND KLINGER!"

Posted by cedricsbigmix at 5:30 PM No comments: