REACHED FOR COMMENT BY THESE REPORTERS, BARRY O INSISTED THAT "SPYING IS JUST ANOTHER WAY OF SAYING, 'HEY, BABE, I CARE.'  IF I DIDN'T CARE, I WOULDN'T SPY."

AT THAT MOMENT, WHITE HOUSE SPOKESPERSON JOSH EARNEST DEFECATED IN HIS PANTS AND SCREAMED, "YOU CAN'T PRINT THIS! THIS IS ALL OFF THE RECORD!"

There was most likely none at all.

Her film never had studio backing -- nor even serious interest from a studio.

Even if it had, there are projects studios get behind which get gutted all the time.  Jodie Foster and Robert Redford were supposed to star in Crisis In The Hot Zone but Redford was a dick and a vain one and Jodie walked.  The film had been in competition with Dustin Hoffman, Rene Russo and Morgan Freeman's Outbreak to see which could start shooting first.  That ended when no other name actress wanted to put up with Redford's nonsense.

Films go under all the time, they go from talk to nothing.

They can even be announced -- and advertised -- and then not get made. 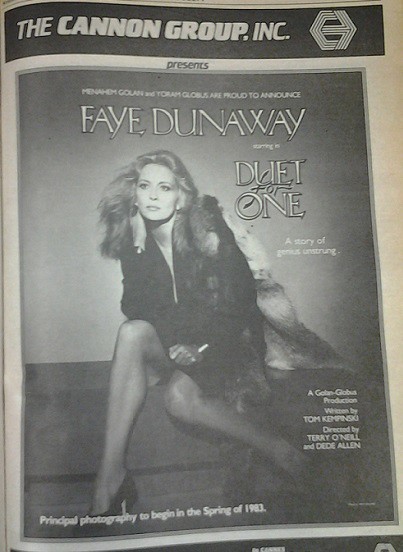 And she's going to make the film Duet For One.  It's about to begin filming.


When it was made a few years later, it would star Julie Andrews.

There was no plot to keep Faye busy, to tie her up, so no one else could use her in movies.

Joan Crawford would leave MGM for, among other reasons, the refusal to allow her to star in The Spiral Staircase despite the fact that she'd optioned the source material.  (A few years later, RKO would make the film and it would be a hit.)  Miriam Hopkins thought she'd play the lead in the film of Jezebel.  She'd played the role on Broadway, she held the rights, Jack Warner led her to believe that handing the rights over to his studio meant she'd star in the film.  Instead, Bette Davis played the role and won her second Best Actress Academy Award.  Bette Davis was led to believe she'd star as Mary Todd Lincoln but when the project moved from development towards filming, Jack Warner refused to greenlight claiming a film that told the truth would be an insult to Abraham Lincoln's memory.

Yentl is a film classic and one that director Barbra Streisand should forever feel proud of.  But as much as the film on the screen is something to be proud of, Barbra's dedication to the project is also something to be proud of. She started working on the project in 1968 and never lost faith in it, never took a "no" as the final answer and, in 1983, the film was reality.

Or look at The Dollmaker.  In 1971, Jane Fonda falls in love with Harriette Arnow's book. In 1974, she meets with the author about making the book.  She's in her grey-listed period -- where politics keep US studios from hiring her for many projects (though she still has a few offers coming in -- she turned down Chinatown and The Exorcist, among others, during this period).  When Tricky Dick resigns and realities have to be reconsidered, studios are interested again and her first leading role is in the box office hit Fun With Dick and Jane (1977).  One hit after another followed and Jane still couldn't get studio interest for the film.  So, as she herself tells it, she met with ABC in 1979, the day after she won her second Academy Award, and she (and Bruce Gilbert) proposed The Dollmaker as a movie of the week for the TV network.  ABC was all for it but there was still the issue of the script.  It would be 1983 before the TV movie was filmed and 1984 when it aired.   (Jane won an Emmy for her performance.)

To get a film made -- for the big screen or for TV or (today) the internet) -- you have to be a long distance runner.

The film frustrations Cindy Sheehan went through don't even qualify as a 1 K fun run.


Let's deal with another aspect and then we'll circle around.

That was a huge loss for his family.

As someone who felt her loss was great enough to warrant a meeting with a world leader, I'm not really sure where Cindy gets off insulting Chris Kyle.

Guess what, it's not all about you, Cindy Sheehan.

I've defended Cindy here repeatedly over the years.  She's said nothing to help another mother, has she? She can't identify with Pat Smith's loss?

I've wondered about that.

And now here is she is trashing a dead man because she thinks he's racist -- or says she thinks it.


If only we were all so pure and wonderful like Cindy Sheehan?


The fact of the matter is she needs to lose the judgmental.


There's no reason for her to insult Chris Kyle.

Her view of her son is in conflict with those who served with him.

He was put through the same socialization process everyone in the military is.

So I'm not understanding why Cindy's being so awful to Chris Kyle who has a family that misses him dearly.

You're not happy that he shot Iraqis?

I'm not happy that any Iraqis were shot.

But the blame for that, for Americans, goes to the White House (then and now) and the Congress.

If you're offended by what Chris Kyle did, then you need to take that argument up the chain.

Stop blaming the people and start blaming those in charge.

He said some mean spirited things about Arabs?

I don't doubt it.

And I'm not stupid enough to assume he came up with those remarks himself.  I'm fully aware that this was part of training, part of the socialization, part of the attempt to create the belief in 'the other' which allows the dehumanization necessary to kill.

I don't expect Cindy to be a saint.  I do expect her to have common sense.

Her post is beneath her and goes to the reality that she has a myth about Casey with regards to Iraq and it's a myth she wills herself to believe.


Chris Kyle.could have been her son but she attacks him and berates him in a post.

She has no humanity to share and can't relate to the family of Chris Kyle on any level.

Nursing a myth takes a lot out of you.

And let's point out the obvious about her supposed offense regarding what Kyle wrote in his book.

Cindy does a radio show.  If she really cares about the Iraqi people why doesn't she cover Iraq?

If she really cares why, in the year long bombing of Falluja's residential neighborhoods, has she never devoted an episode to this topic?

This is not the Islamic State.

This is the Iraqi military bombing Falluja daily.

It started under Nouri al-Maliki.  September 13th, new Prime Minister Haider al-Abadi noted how wrong it was -- but stopped short of calling it a War Crime -- it is one, it's the legal definition of "collective punishment" -- and promised the bombings had stopped.  The next day they continued.

So when Cindy's going to talk about that?

I'm so tired of people who pretend they care about this or that but when they've got the chance to talk about something that matters, they don't.

Ongoing War Crimes and no one wants to call them out.  It's pretty much Human Rights Watch, Felicity Arbuthonot and this community willing to call out the War Crimes. (If you call it out or know someone who does, send a link to common_ills@yahoo.com and it will gladly be noted here.)

How damn difficult is for a citizen in, for example, the United States to call out the Iraqi government attacking civilians daily in Falluja?

I don't think it's difficult at all.

But the silence from Cindy Sheehan and others never ends.

Pick any day at random, let's go with June 18th: The bombing of Falluja's residential neighborhoods claimed the lives of 6 civilians -- two of whom were children -- with sixteen more civilians injured.


So don't come whimpering to me about some 'naughty words' that were used in a book when you don't have the guts, the spine, the compassion, the humanity to call out the year long suffering of Sunnis in Falluja as the military has repeatedly targeted the residential neighborhoods wounding and killing thousands in 2014 alone.


The United Nations refuses to release an 'official' count on deaths in Falluja and that's because they don't want to speak up about the ongoing War Crimes.

The only time they've acknowledged it seriously was when new Prime Minister Haider al-Abadi announced these bombings had ended -- then the UN had praise to offer publicly.  But the bombings didn't end, the UN didn't retract their praise or even acknowledge that the bombings continued.

And these bombings have other impacts as well. 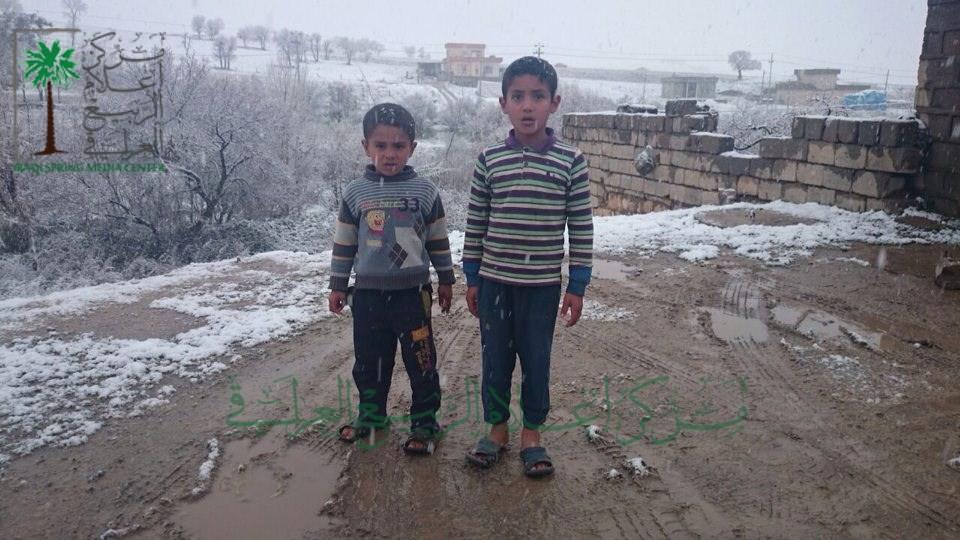 
As Iraqi Spring MC notes, they add to the ever-growing refugee population in Iraq.


The silence also means others can get away with it.

Today, civilian areas in and around Baghdad were bombed by the war planes in the US-led coalition.

RECOMMENDED: "Iraq snapshot"
"Now they feign interest in Iraq's LGBTQ community"
"The New VP Candidate"
"Impeach him"
"Phoebe Snow's live album"
"A trailer is not a film but . . ."
"The mole on State of Affairs"
"state of affairs"
"Best TV news of the week"
"Sweet Tea or Non-Sweet Tea, that is the question"
"My New Year's resolution (it's kaput)"
"Topics"
"Poor Kevin Hart -- gay people are so strange!"
"Reese Witherspoon"
"Hulk versus Hulk"
"Best supporting actress"
"Who will win Best Actor?"
"Best Picture"
"f**k 'poor' selma - how the director destroyed the film's oscar chances"
"The always forgotten"
"Best director?"
"FYI Oscar"
"Don't call him king!"
"THIS JUST IN! HE'S FEELING PRETTY!"

Posted by cedricsbigmix at 6:53 PM