CRANKY CLINTON SURE KNOWS A LOT OF PEOPLE WHO OVERDOSED.

AND SHE SURE HAS A LOT OF ENEMIES.

CRANKY SAYS IF SHE DOESN'T GET THE PRESIDENCY, SHE'S HEADED TO BROADWAY WHERE SHE'LL BE THE LEAD IN ALL FEMALE MUSICAL REMAKE OF BRIAN DE PALMA'S SCARFACE. 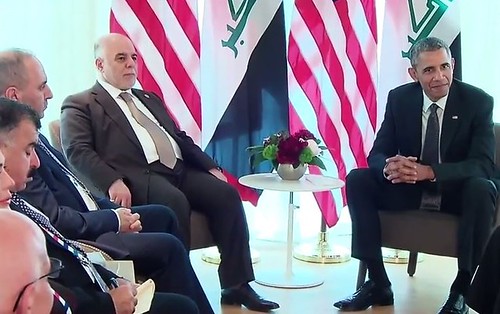 US President Barack Obama:  And that’s why a lot of our discussion today will focus on how we can build on the thousands of Iraqi security forces that we have already trained; how we can coordinate more effectively in getting weapons into the hands of those who are prepared to fight ISIL on a timely basis; how we can ensure that the work that the Prime Minister has done to maintain an inclusive government in Baghdad continues. And in all of these discussions, what I found is that Prime Minister Abadi is very much committed to effective, inclusive governance.  And there’s a refreshing honesty, I think, on the part of the Prime Minister in recognizing that there remains a lot of work to be done.  But as long as the international coalition sustains its efforts, and as long as Prime Minister Abadi and the Iraqi government stay committed to an inclusive approach to gaining back territory from ISIL and then instituting governance that is inclusive and serves the people, I’m absolutely confident that we will succeed.

An inclusive approach to the government?

Is Barack unaware of the talk on Arabic social media that it's time to start protesting in Iraq again?


Such protests, if they took place, would make it much more difficult for Barack to lie that Haider's all about the inclusive.

He was selling that lie hard today -- in the joint-appearance with Haider as well as during a press briefing.  From the latter:


US President Barack Obama:  The final point that I emphasized to Prime Minister Abadi is the political agenda of inclusion remains as important as the military fight that’s out there.  If Sunnis, Kurds, and Shia all feel as if they’re concerns are being addressed, and that operating within a legitimate political structure can meet their need for security, prosperity, non-discrimination, then we’re going to have much easier time.  And the good news is Prime Minister Abadi is very much committed to that principle.  But, obviously, he’s inheriting a legacy of a lot of mistrust between various groups in Iraq -- he’s having to take a lot of political risks.  In some cases, there are efforts to undermine those efforts by other political factions within Iraq.  And so we’ve got to continue to monitor that and support those who are on the right side of the issue there.


Political inclusion is as important, according to Barack, as the military fight.


So how many diplomats has he dropped on Iraq?

How many Imaans who can preach inclusion and unity?


Today alone, the Defense Dept boasted of these air strikes in Iraq:

Airstrike assessments are based on initial reports. All aircraft returned to base safely.


So if the political situation in Iraq is as important as the military, what has Barack done to aid it?  To foster a climate of unity?


At the  G7 conference, Josh Earnest, White House spokesperson, attempted to distort the meaning of a political solution.

Josh Earnest:  Uniting the diverse country of Iraq to confront the ISIL threat will be critical to their success.  And we’ve seen evidence of this approach when it comes to the efforts of Iraqi security forces to face down ISIL in Anbar Province.  The Prime Minister has received strong support from his multi-sectarian cabinet, but also from Sunni leaders in Anbar, that the deployment of a multi-sectarian force in Anbar Province against ISIL isn’t just important, it’s actually something that they specifically requested.  And they welcome the support of the international community for local Sunni fighters in Anbar and they welcome the decision from Prime Minister Abadi to deploy even Shia fighters and Kurdish fighters that are under the command and control of the Iraqi central government.  That’s an indication that Prime Minister Abadi’s multi-sectarian, inclusive approach is one that has the support of even Sunni leaders in Anbar Province.  Again, that is an indication that the strategy that we believe will be critical to their success is one that Prime Minister Abadi and other leaders in Iraq are committed to pursuing.


No, it's not and that's a ridiculous claim.

A) The Sunnis fighting the Islamic State in Anbar were largely fighting it for some time.  In some cases, they've been fighting since before Haider was even prime minister.

B) Sunnis fleeing Ramadi?  Sunni families are not allowed to enter Baghdad and the males of fighting age are forced to return to the area as fighters against the Islamic State.


Kevin Liptak (CNN -- link is text and video) reports, "President Barack Obama said Monday his top national security advisers were still working to solidify training plans for Iraqi defense forces battling ISIS in their own country."  And he quotes Barack stating, "We don't yet have a complete strategy because it requires commitments on the part of the Iraqis."  Tom McCarthy (Guardian) notes:

The comments echoed the president’s assessment nine months ago, when he was asked at a White House news conference about how to defeat Isis militants in Syria.
“We don’t have a strategy yet,” Obama said then.


BBC News quotes Barack declaring, "We want to get more Iraqi security forces trained, fresh, well-equipped and focused and [Mr] Abadi wants the same thing so we're reviewing a range of plans for how we might do that."

Abadi wants the same thing, does he?


But Kristina Wong (The Hill) reports today, "The U.S. mission in Iraq has stalled at one of five coalition training sites because the central government has not been sending new recruits, according to defense officials.  Baghdad has not identified or sent any new recruits to the Al-Asad air base in western Iraq for as many as four to six weeks, defense officials said Monday. "

If everyone's so committed, how do you explain that?

And how are you supposed to hear that news and not immediately think of the police training attempts in Iraq, by US forces, as the winter months bled from 2011 to 2012 and no police trainees showed up for the training?

Half a billion dollars set aside for that training (US tax dollars) and it never took place because Iraqis refused to show up for the training.

"Who's joined the campaign?"
"THIS JUST IN! CRANKY HAS A NEW ADVISOR!"