A major address coming from Clinton

CRANKY CLINTON HAD IT SEWN UP!

THAT'S WHAT EVERYONE SAID.

BUT POLLS NOW SHOW HER LOSING HER LEAD.

LAST NIGHT, AT A STRATEGY SESSION, CRANKY PRESENTED THE SPEECH SHE WANTS TO DELIVER TO AMERICA "BEFORE IT'S TOO LATE."

SWEARING THAT SHE WILL NOT LET DONALD TRUMP STEAL THIS FROM HER "THE WAY THAT JUNIOR SENATOR FROM ILLINOIS DID IN 2008!," CRANKY EXPLAINED:


AMERICA, IT IS MY TIME.  YOU OWE ME THIS.  REMEMBER IN 1998?  THE COUNTRY WAS TORN APART.  I COULD HAVE DONE THE SELFISH THING, THE PIGGISH THING, THE SMART THING AND WALKED OUT ON BILL.  BUT THE PRESIDENCY WOULD HAVE COLLAPSED.  I SAVED THE COUNTRY BY STAYING IN MY FAKE MARRIAGE AND PRETENDING LIKE I WAS NOT HUMILIATED PUBLICLY FOR THE 70TH TIME BY YET ANOTHER OF BILL'S AFFAIRS.  I PUT YOU AHEAD OF MY PERSONAL HAPPINESS.  LOOK AT MY FACE?  HAVE I EVER HAD A SINGLE DAY OF HAPPINESS?  NO.  AND THAT'S WHY YOU OWE IT TO ME NOW AND WHY YOU MUST VOTE FOR ME.


THOUGH MOST ADVISORS GREETED THE SPEECH WITH SILENCE, LONGTERM AID AND CAMPAIGN JOKE HUMA ABEDIN WEPT OPENLY AND EXCLAIMED, "TELL IT, SISTER! TELL IT!"

I am wrong all the time.


But overall, our record stands.

Unlike Luay-Luay, we have called things correctly repeatedly.


When the White House didn't want to face the truth about Nouri al-Maliki -- and even after it had but didn't want the American people to know -- we have told the truth on Nouri.

Before WikiLeaks revealed cables discussing the US government's view that Nouri was paranoid, we were already telling you -- years before -- about the CIA analysis that felt Nouri was the best candidate for prime minister of Iraq because his paranoia would make him easy to manipulate.

Luay Luay lies but if you want to give him the benefit of the doubt -- his 'truth' is skewed by his desire to make money off of Iraq.

Greed blinds him to realities like the fact that the militias are said to be recruiting child soldiers.  Human Rights Watch issues an alert which opens:

Iraqi government-backed militias have recruited children from at least one displaced persons camp in the Kurdistan Region of Iraq to fight against Islamic State forces. All security forces and armed groups should abide by international law and demobilize any fighters under age 18.
Witnesses and relatives told Human Rights Watch that two tribal militias (Hashad al-Asha`ri) recruited as fighters at least seven children from the Debaga camp on August 14, 2016, and drove them to a town closer to Mosul, where Iraqi Security Forces (ISF) are preparing for an offensive to drive the Islamic State, also known as ISIS, from the city. The Hashad al-Asha`ri, made up of local Sunni fighters, are expected to play a key role in Mosul military operations, while the government may order the mainly Shia militias of the Popular Mobilization Forces to stay out of the Mosul fighting.
“The recruitment of children as fighters for the Mosul operation should be a warning sign for the Iraqi government,” said Bill Van Esveld, senior children’s rights researcher. “The government and its foreign allies need to take action now, or children are going to be fighting on both sides in Mosul.”
Human Rights Watch has documented that ISIS has extensively recruited and deployed children in its forces.
Debaga camp, 40 kilometers south of Erbil, currently houses over 35,000 people displaced in the fighting between government forces and ISIS. Two people living in the camp since March told Human Rights Watch that at least two militia groups engaged in the fighting against ISIS are entirely made up of camp residents. They said that these two militias, commanded by Sheikh Nishwan al-Jabouri and by Maghdad al-Sabawy, the son of the recently deceased commander Fares al-Sabawy, have been recruiting from the camp for months. Their trucks have been arriving empty, and driving away filled with men, and in some cases, boys.

The two camp residents said that two very large trucks arrived in the evening of August 14 and took away about 250 new recruits, at least 7 of them under age 18, to join Sheikh al-Jabouri’s forces. Witnesses and other camp residents said that all the men and boys volunteered to join the militias. An aid worker who was on the road saw the two trucks heading to Hajj Ali, a town about 46 kilometers from Debaga and 7 kilometers from the front lines with ISIS. They contacted local aid workers in Hajj Ali, who confirmed that the group had arrived there, stayed for one night, and then went on to join a militia nearby. 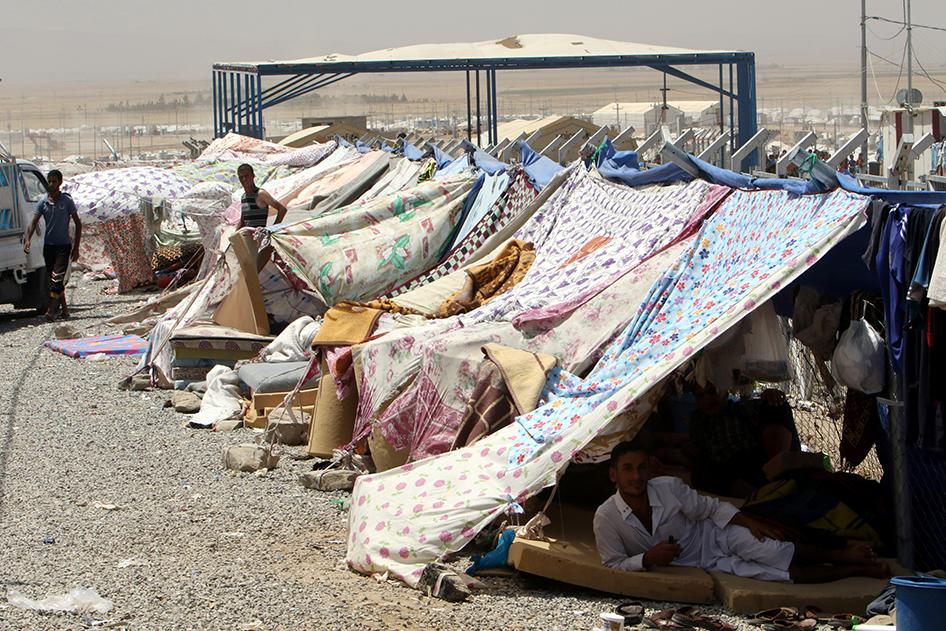 The refugee crisis in Iraq is growing and that also doesn't convey the 'nothing but blue skies' Luay Luay would have you believe.


Posted by cedricsbigmix at 5:53 AM